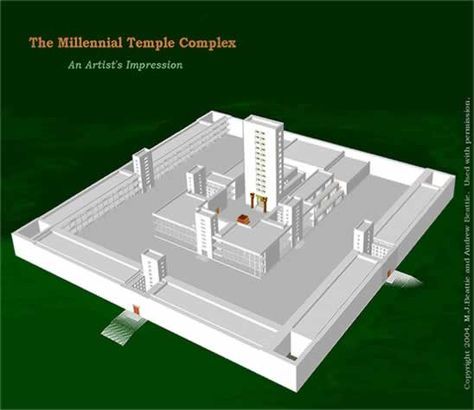 1 In the twenty-fifth year of our exile, at the beginning of the year, on the tenth of the month, in the fourteenth year after the fall of the city—on that very day the hand of the Lord was on me and he took me there.

2 In visions of God he took me to the land of Israel and set me on a very high mountain, on whose south side were some buildings that looked like a city. 3 He took me there, and I saw a man whose appearance was like bronze; he was standing in the gateway with a linen cord and a measuring rod in his hand.

4 The man said to me, “Son of man, look carefully and listen closely and pay attention to everything I am going to show you, for that is why you have been brought here. Tell the people of Israel everything you see.”

The above image is an artists impression of Ezekiel's Temple Vision

One of the most compelling and least talked about portions of scripture to support the literal millennial kingdom is found in Ezekiel chapters 40 to 48.

These chapters are prophetic and describe in great detail, the dimensions, location and construction of a future new temple.

The description of this temple does not match any of the historic literal temples in Israel's history - it has never been built - not yet anyway. A literal reading of these chapters demands that it will be built in the future.

This temple can not and must not be confused with the New Jerusalem as described in Revelation chapter 21. The dimensions and materials used in their respective construction are so different that they are clearly not the same temple.

The other point where we need to avoid confusion is the location of this new temple. Unlike the highly disputed site of the Dome of the Rock and the Western Wall; this new temple will be built on a new site.

Revelation 16 v 19 tells us that during God's final act of judgment in bowl seven; Jerusalem will be split into three parts. I think it is fair to assume that the city will be changed beyond recognition and perhaps the currently disputed sections of Jerusalem will be reshaped. This can be inferred with the adjoining text - "and the cities of the nations collapsed".

Today, Jerusalem is known to have four 'quarters'; Jewish, Muslim, Armenian and Christian. According to Revelation 16 v 19; at the end of the Great Tribulation as a result of Bowl seven of the Wrath of God - Jerusalem will be split into three parts - not four. Think about it!

According to a recent study by the EU Department of Transport and Infrastructure; by 2025, 80 per cent of the world's population will live in towns and cities. God's final act of judgment on mankind will desolate the most densely populated areas of the earth.

This magnificent temple described so comprehensively in Ezekiel's vision will be built in Israel at the commencement of the Millennial reign of Christ. It will last for 1000 years on this present earth. It will ultimately be surpassed in glory and magnitude at the consummation when the New Heavens and New earth are introduced to inaugurate the New Eternal Age.

When I reached this conclusion for myself and wondered if anyone else had come to the same conclusion, I was absolutely delighted when I discovered the following material which describes in great detail the literal nature of this magnificent building and enclosure.

There is no doubt that tensions are rising in the Middle East. The Arabian or Muslim nations that surround Israel today make no secret of their desire to see her wiped off the map forever. In contrast to their wishes; Israel will take centre stage for 1000 years when the Lord Jesus will be recognised by all the nations of earth to be King of kings and Lord of lords.

Video: DTBM Video Training / 'The literal Temple' and 'Israel and the Arab Nations'

Video: Bibliaprints.com / Virtual tour of the Temple in Ezekiel 40 - 48

Video: Bibliaprints.com / Virtual tour of the inside of the temple building