Fossils, Dinosaurs and the Ice Age

When we look at the subject of fossils and dinosaurs we need to establish a couple of guiding principles based on what we know.

First; according to scripture, we know that there was a universal flood 1656 years after creation, circa 2340 + BC.

Timeline 1: The Genesis 5 genealogy clearly illustrates this 1656 year period from Adam to Noah

Therefore, the only animals that existed post-flood were those that survived in the ark.

There are no clues or records of any unusual creatures (dinosaurs) in these books.

This may well suggest that dinosaurs perished in the flood. I would suggest that if these mysterious creatures were the combined result of demonic activity and human depravity, God may have prevented them from coming to Noah's ark.

We have already pointed out that God brought all the animals to Noah, therefore, only the animals that God prompted, came to Noah.

If, on the other hand, these creatures were part of the original creation; they may well have;

b) they might have been more susceptible to climate change after the flood and become extinct early on in the post flood era.

Remains and skeletons scattered across the continents are proof of the cataclysmic convulsions experienced on the earth's surface during the flood.

We have already described how earth’s topography was totally reshaped during the flood. It is almost unimaginable how devastating the deluge was.

It probably created new mountain ranges and changed entire continents as all the tectonic plates shifted. Remember they were totally submerged as the fountains of the great deep burst open.

Animals and mammals of all types and size were immediately swallowed up by these moving land masses. Their corpses, fully intact, were buried beneath layers of silt and rock and would lie preserved until they were unearthed again in a future day.

Many kinds of fish and sea creatures, large and small, would have travelled beyond their normal boundaries as the earth was totally submerged. Many of these would have been trapped in the mayhem and ended up displaced from their normal environment.

They would be found totally preserved in a future day in what must have seemed the most unlikely places. In short, it is no stretch of the imagination to say that the flood can account for all kinds of fossils.

The fact that many of these remains that have been unearthed fully in tact; is proof in itself that these creatures did not die a natural death. The sudden devastation of the flood gives a more rational explanation of their preserved condition; otherwise their carcasses would have rotted and wasted away in the normal way.

As we highlighted on the Creation page: Professor John C Lennox has written about this subject in his book titled ‘God’s Undertaker’. See Chapter 6 – page 113-117.

“The impression that micro-evolution is limited in its scope is confirmed by the comments of Wesson and others to the effect that the fossil gives no good examples of macro-evolution. This will sound surprising to many people since it is a widespread public impression that one of the most powerful evidences for evolution comes from the fossil record. And yet this impression does not correspond to all that is to be found in the scientific literature.”

“Indeed, at the outset, some of Darwin’s strongest objectors were palaeontologists. He himself gives us the reason for this; it concerns the absence of the transitional forms in the fossil record, which his theory led him to expect.”

“He wrote in The Origin of the Species; ‘The number of intermediate varieties, which have formerly existed on the earth, {should} be truly enormous. Why then is not every geological formation and every stratum full of such intermediate links? Geology assuredly does not reveal any such graduated organic chain; and this, perhaps is the most obvious and gravest objection which can be urged against my theory.’”

“Zoologist Mark Ridley comments on the situation: ‘The fossil record of evolutionary change within single evolutionary lineages is very poor. If evolution is true, species originate through changes of ancestral species: one might expect to be able to see this in the fossil record. In fact it can rarely be seen. In 1859 Darwin could not cite a single example.’”

“What, then, is the result of nearly a century and a half of intensive activity, since Darwin’s time? Palaeontologist David Raup of the Field Museum of Natural History, which houses one of the largest fossil collections in the world, said: ‘We are now about 120 years after Darwin and the knowledge of the fossil record has been greatly expanded. We now have a quarter of a million fossil species, but the situation hasn’t changed much."

"The record of evolution is still surprisingly jerky and, ironically, we have even fewer examples of evolutionary transition than we had in Darwin’s time.’” End quote.

According to the views expressed above, there is no compelling evidence for transitional evolution within any known species. If there was, the New Atheists would be crowing from the tree tops, but they are conspicuously silent!

On the contrary, the thousands of individual fossils which have survived, confirm the continuity of species. The fossil record actually lends weight to the creation account - and the Flood! 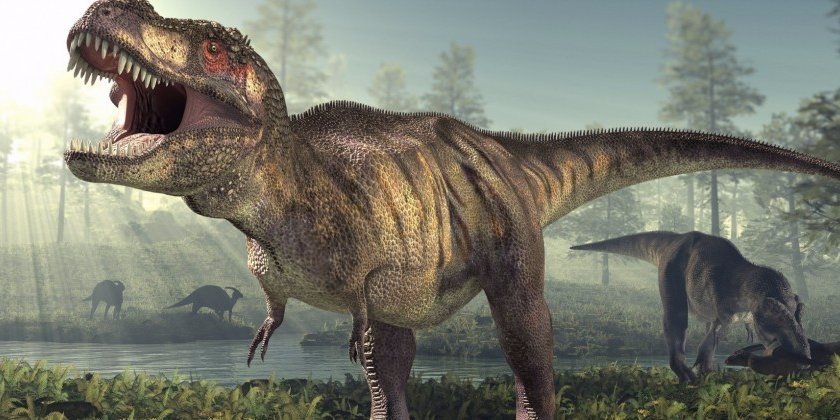 Where did dinosaurs come from and where did they disappear to? If Dinosaurs were part of the original creation, they would not have been carnivorous, they would have been herbivorous. See Genesis 1 v 30.

Some varieties would have been transformed into carnivores subsequent to the curse of the fall. This could explain the ferocious jaws and teeth of some of the skeletons that have been unearthed.

It may be that some of these were not included in the groups of animals that God sent to the ark. Perhaps they had become too dangerous as a result of the curse after the fall.

If this was the case, they were simply destroyed in the flood. The deluge would have buried them; some of these would be lost forever, others would be preserved and unearthed several thousand years later. If they were part of the original creation, they would also have been named by Adam (Genesis 2 v 19-20).

This might seem like a bizarre suggestion, but I can assure you that the level of sin and degradation on earth before the flood was so bad that God deemed it necessary to intervene in the judgmental flood. These would then have been like demon creatures. If so, they would simply have perished in the judgement of the flood with no survivors in the ark. See Genesis 6 v 2-4.

"For if God did not spare angels when they sinned, but sent them to hell, putting them in chains of darkness to be held for judgment; 5 if he did not spare the ancient world when he brought the flood on its ungodly people, but protected Noah, a preacher of righteousness, and seven others..."

The above scripture refers to fallen angels or demons from the pre-flood age; they were removed from the earth and locked up in the abyss for eternal punishment at the final judgement.

These fallen angels had behaved in such a way that God removed them from earth so that they could no longer interact with mankind. The vile perversion and sin of bestiality was widely practiced in Canaan before the Israelite's came into their ‘Promised Land’.

On the 'Promised Land' page, we point out that God expelled the six nations because of their sin. It is possible that this vile practice was reintroduced after the Flood.

The disappearance of the dinosaurs can be explained by the flood and the changes to the earth’s atmosphere and stratosphere subsequent to the flood.

Genesis 7 v 2-3 tells us; Only seven pairs of 'clean' animals and one pair of 'unclean' animals survived the flood and it is likely that the post flood changes to the earth’s weather systems and the unhindered ultraviolet rays from the sun could have made conditions less suitable for these creatures.

Therefore, some species may have become extinct as the earliest victims of the catastrophic changes to the earth’s new climate. The carcasses of these creatures would also have fallen victim to random displacement in the carnage as the earth’s surface was reshaped.

Again, the flood can explain the many fossils and skeletons that have been preserved and unearthed over the years. 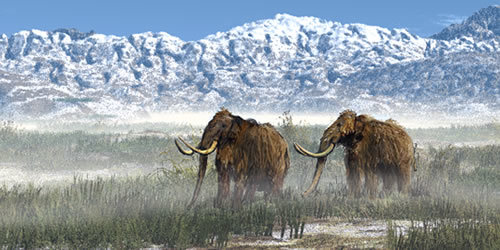 What caused the Ice Age and where does it fit in with bible history?

We have already pointed out that the flood was a universal deluge of unimaginable destruction. In the unlikely event that there was Northern and Southern polar regions before the flood, these would have melted away during the deluge when the entire earth was covered with water for more than one year.

In particular, the earth’s atmosphere and stratosphere were fundamentally and dramatically changed for all time as the floodgates of the heavens opened. The pre-flood conditions on earth were probably characterised by a constant and even temperature and humidity.

When earth lost its massive protective vapour canopy it became exposed to freezing temperatures from the outer stratosphere. It is likely that this generated turbulent winds with extreme hot and cold temperature variances.

Early civilisation was centered on the equator, particularly in the ‘Middle East’ and surrounding areas where the average temperatures after the flood would have been constant.

Another consideration regarding post-flood climate change is the possibility that the actual angle of the earth's axis could have been altered during the deluge.

It may even have been part of the catalyst that God used to bring about the catastrophic changes in the earth's topography and atmosphere. This could go some way to explain the dramatic changes in our weather systems and other phenomenon like the golf stream.

This could offer some clues as to how the Northern and Southern polar regions and the Ice Age could have developed in the decades or centuries immediately after the flood.

On the 'Springs and Floodgates' page, we have already discussed how God shook the earth;

6 “This is what the Lord Almighty says: ‘In a little while I will once more shake the heavens and the earth, the sea and the dry land. 7 I will shake all nations, and what is desired by all nations will come, and I will fill this house with glory,’ says the Lord Almighty.

As the new post-flood conditions settled down over a long period of time, the North and South poles, now exposed to these extremes, could have developed into the cold areas that we are now so familiar with.

As the post-flood earth settled into its new climate and weather systems these poles and the extended ice-land mass around them may well have formed into massive Arctic and Antarctic freeze zones that took many years to recede to the familiar topography of today.

This is no new phenomenon; climate change is happening on a global scale today and these great uncharted areas of earth are receding further still as a result of global warming.