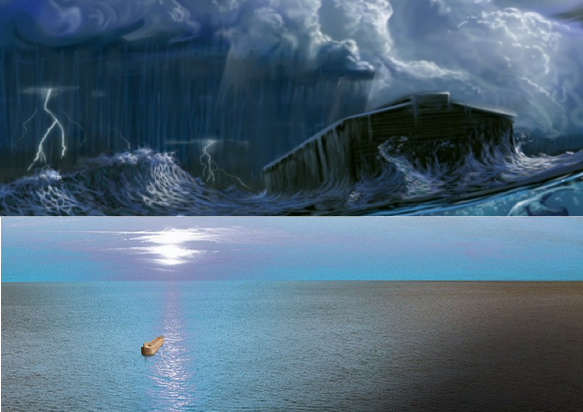 The earth was covered with water

In the six hundredth year of Noah’s life, on the seventeenth day of the second month – on that day all the springs of the great deep burst forth, and the floodgates of the heavens were opened.

Please notice that the flood waters were generated from two massive sources; the springs of the great deep, and the floodgates of the heavens. Make no mistake about it; the entire surface of the earth was completely covered with water.

The extensive outer layer of water vapour above the sky that was uniformly enveloped around the entire earth’s atmosphere suddenly burst open and the effects would be catastrophic. This was not a localised flood as some would suggest; this was a global deluge.

God used some sort of cataclysmic mechanism to instigate a prolonged series of earth shattering seismic movements to cause drastic changes in the earth’s structure and atmosphere that would breach the vast underground water reservoirs and pierce the deep canopy of water vapour above the sky.

Both of these great water sources were burst open on the same day. The combined effects caused these vast underground reservoirs of water to burst open and at the same time the great water vapour canopy was pierced and floods of water poured up from the ground and down from the sky all across the earth. 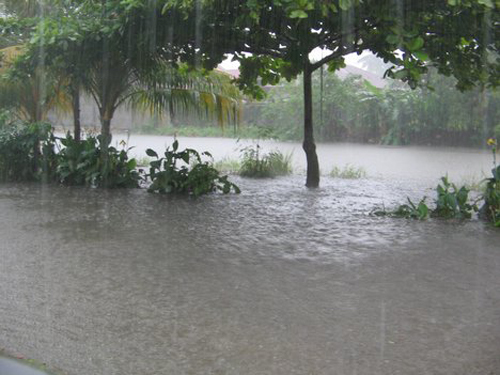 By faith Noah, when warned about things not yet seen, in holy fear built an ark to save his family. 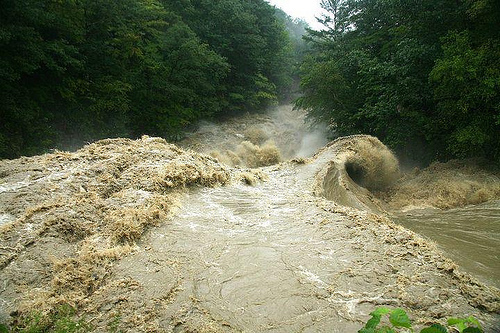 Caught in the torrents

The initial effects of these two catastrophic events would be torrents of water flowing over the land with flash floods and rivers wreaking havoc all across the earth.

Within hours the compounding effects of these two vast water sources would spell danger for mankind and animals alike. Untold panic would ensue.

Within the first day or two of this unrelenting rain and flash flooding across the entire earth, massive landslides would be witnessed on hill sides and mountain slopes as the soaking land gave way to the deluge.

Hundreds of thousands of people and animals would be drowned or buried alive in sudden landslides and earthquakes. However, for those in the valleys and plains, it was already all over as many had already perished in the judgement.

I can envisage men and women recalling the warnings of righteous Noah, now attempting to get their children, livestock and animals to the relative safety of higher ground. But the torrents keep flowing and the unrelenting lashing rain keeps falling. 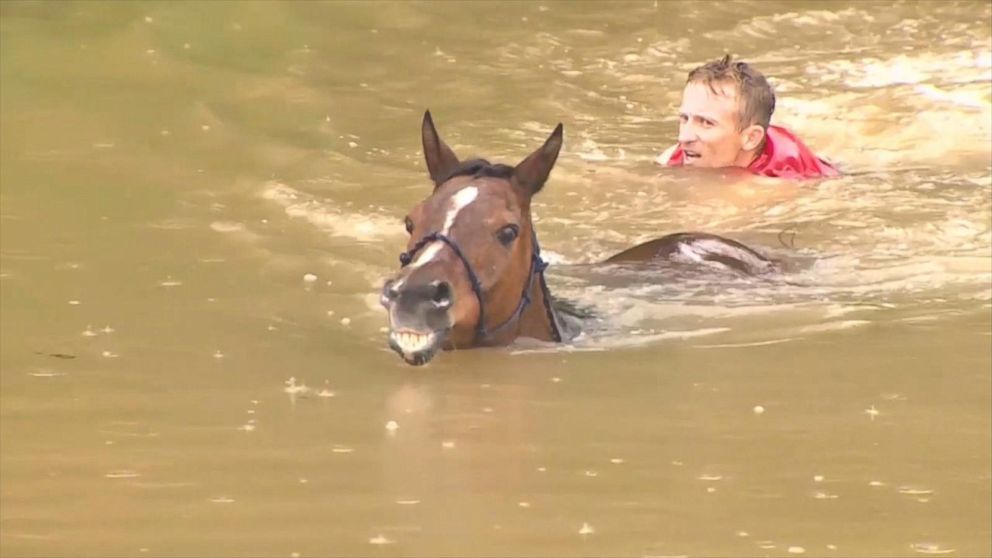 I can see in my mind’s eye, young mothers drenched and stumbling through violent torrents and rivers as their babies and children are swept away out of sight, gone, lost forever! How helpless, how hopeless, there was no respite.

I can hear the fearful screams and cries of helpless young children being swept away from their desperate parents by the powerful torrents. Parents were left exhausted and bewildered at the loss of family and property, only to face certain death themselves. I see the elderly and infirm, helpless, hopeless, resigned to their fate. 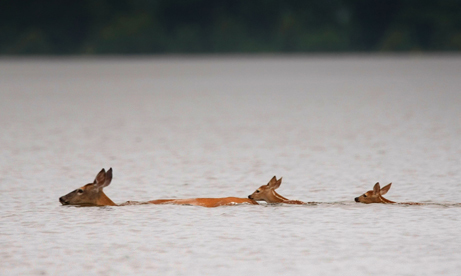 No hope of survival

I can see all kinds of animals stumbling and tumbling as the waters engulf them and eventually swirl above their fear filled eyes.

I see cows, horses, elephants, lions, monkeys, sheep, birds and insects; after struggling for minutes or even hours for survival, they give in to the rising waters in sheer exhaustion and defeat.

Some of these poor animals would have managed to swim for a while, but doomed and exhausted they would spend their last ounce of energy and with their very last gasp of air, they would give up in exhaustion and despair and sink to the miry depths of this judgmental flood. 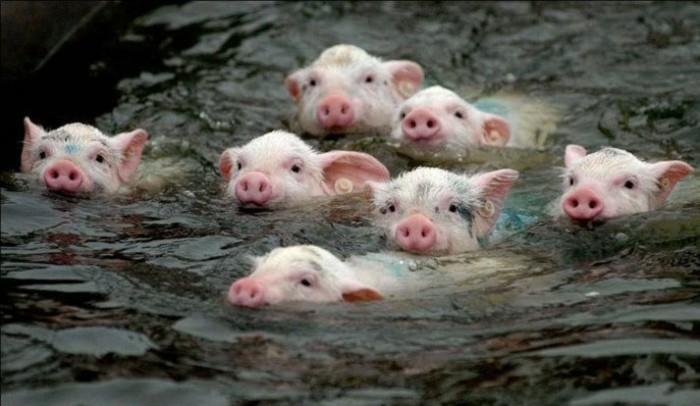 This was man's fault

The few people who reached the temporary safety of higher ground were eventually gripped with fear and terror and perhaps even remorse as the unrelenting waters rose higher and higher.

Floating debris of all kinds, dead bodies and sinking animal carcasses spelled the end. They suffered in the knowledge that Noah was right after all. The flood would come and destroy all life on earth. Soon it would all be over.

Only the ark would be left floating in eerie silence on the waters that would eventually cover all the earth. 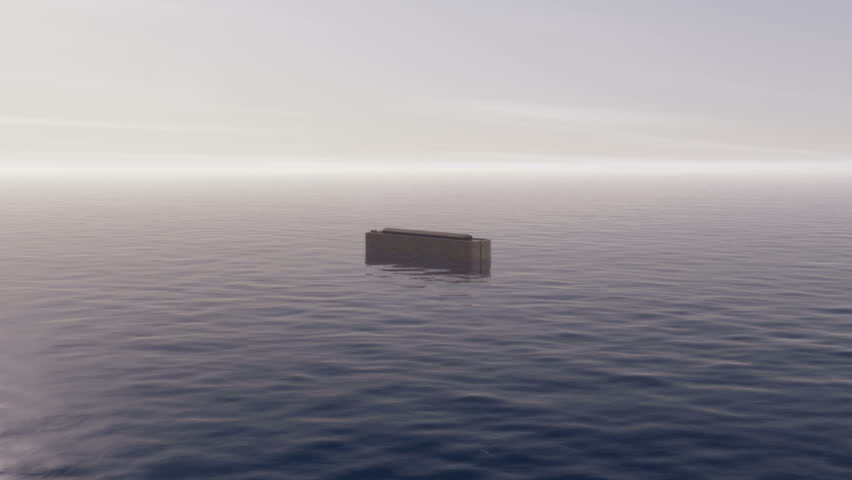 We do not read of the ark having a sail or a rudder; this mega structure would be guided to safety by the sovereign will of God. This is after all a biblical record which involved the supernatural intervention of God himself. 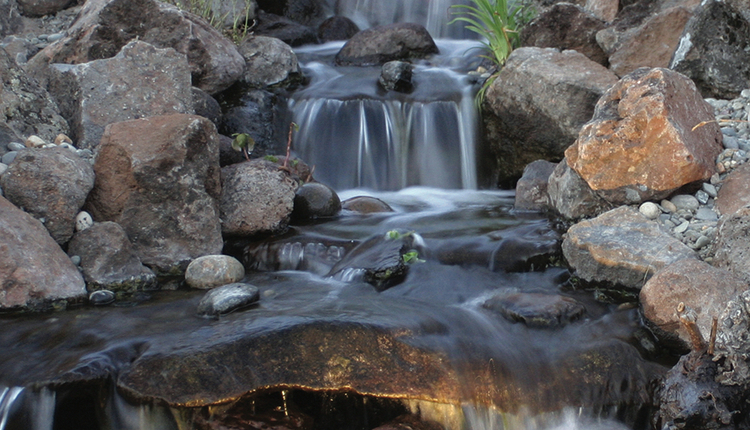 - the LORD God formed the man from the dust of the ground and breathed into his nostrils the breath of life, and the man became a living being.

While I would not be dogmatic about it; I find it conceivable that there would have been no rain before the flood.

Prior to the flood, God used an extensive underground irrigation system to water the surface of the earth. Also, before the flood, the earth’s immediate atmosphere could well have been insulated from the cold temperatures of the stratosphere as we know it today.

There was probably an evenly distributed atmospheric pressure and a more uniformly distributed temperature around the earth. It is conceivable that there would have been no universal winds and no thermosyphon system or Gulf Stream as we have today. 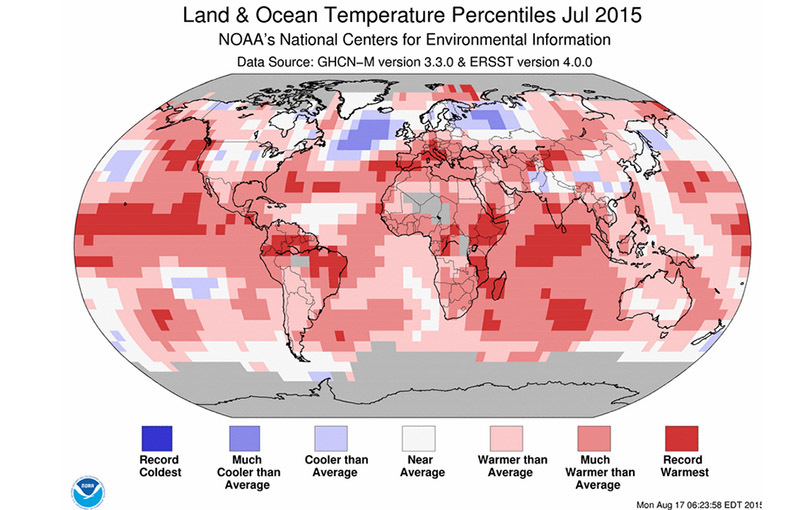 After the flood, the earth’s atmosphere was fundamentally changed. The earth’s surface was now exposed and the vast protective canopy of vapour was dispersed.

The earth would now become susceptible to climate variances that would instigate often gradual and sometimes sudden changes in weather with high and low pressure areas, hot and cold winds, and the resulting weather systems that change so frequently.

Nowadays we try to forecast the changing weather on an hourly, daily and weekly basis. It is conceivable that the Ice Age itself happened after the flood as a direct result of these cataclysmic changes in the earth’s atmosphere and weather systems.

Whenever I bring clouds over the earth and the rainbow appears in the clouds, I will remember my covenant between me and you and all living creatures of every kind. Never again will the waters become a flood to destroy all life.

Whenever the rainbow appears in the clouds, I will see it and remember the everlasting covenant between God and all living creatures of every kind on the earth.”

It would seem that there were no clouds and no rainbows in the sky before the flood. This was the sign of a new covenant between God and the earth. 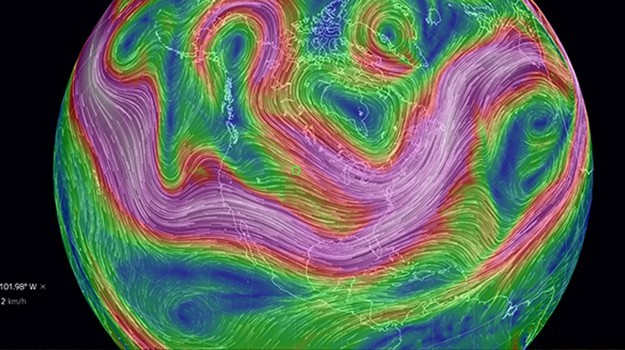 A change in atmosphere

20 Then Noah built an altar to the Lord and, taking some of all the clean animals and clean birds, he sacrificed burnt offerings on it.

21 The Lord smelled the pleasing aroma and said in his heart: “Never again will I curse the ground because of humans, even though every inclination of the human heart is evil from childhood. And never again will I destroy all living creatures, as I have done.

22 “As long as the earth endures, seed time and harvest, cold and heat, summer and winter, day and night will never cease.”

It is evident that after the flood, earth's atmosphere and weather systems had fundamentally changed.

It would be easy to imagine the seasons being more pronounced than they were before the flood. It was post flood that God made the specific promise that these changing seasons would endure with the earth.

If you think that I am getting a bit carried away; listen to this:

6 “This is what the Lord Almighty says: ‘In a little while I will once more shake the heavens and the earth, the sea and the dry land. 7 I will shake all nations, and what is desired by all nations will come, and I will fill this house with glory,’ says the Lord Almighty.

25 See to it that you do not refuse him who speaks. If they did not escape when they refused him who warned them on earth, how much less will we, if we turn away from him who warns us from heaven?

26 At that time his voice shook the earth, but now he has promised, “Once more I will shake not only the earth but also the heavens.”

27 The words “once more” indicate the removing of what can be shaken—that is, created things—so that what cannot be shaken may remain.

The above scriptures tell us that at some time in the distant past - God shook the earth! I would suggest that the flood is when this happened and that it was indeed a cataclysmic, earth shattering event.

Not only so, but God will once more - in the future - shake the earth. I have no doubt that this will happen during the Tribulation as God's final act of judgement on mankind. This will take place when the final bowl - bowl seven - is poured out. Listen to this:

17 The seventh angel poured out his bowl into the air, and out of the temple came a loud voice from the throne, saying, “It is done!”

18 Then there came flashes of lightning, rumblings, peals of thunder and a severe earthquake. No earthquake like it has ever occurred since mankind has been on earth, so tremendous was the quake.

19 The great city split into three parts, and the cities of the nations collapsed. God remembered Babylon the Great and gave her the cup filled with the wine of the fury of his wrath. 20 Every island fled away and the mountains could not be found.

21 From the sky huge hailstones, each weighing about a hundred pounds, fell on people. And they cursed God on account of the plague of hail, because the plague was so terrible.

Scripture tells us that no one knows the day or the hour of the Lord's return. On this point we are clear.

However, think of it like this; if the Lord Jesus comes to the air - the Rapture - within the next few years, then this earthquake could conceivably happen in the next decade!

9 Within the three days, all the men of Judah and Benjamin had gathered in Jerusalem. And on the twentieth day of the ninth month, all the people were sitting in the square before the house of God, greatly distressed by the occasion and because of the rain. 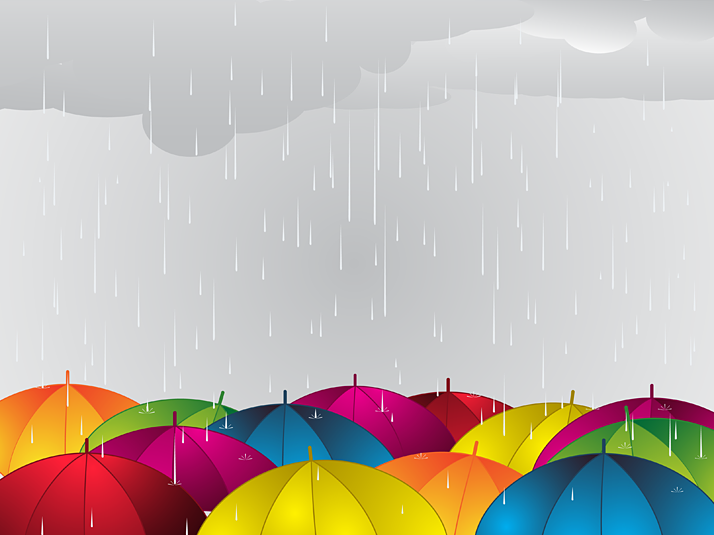 Why is it that most of us don't like rain? We know that we need it but we simply don't like it. It causes us inconvenience with all sorts of things, like taking photographs, drying the laundry, cutting the grass, playing golf or walking the dog.

Rain can affect our activities, it can make us reschedule all sorts of things. It should be a reminder to mankind of the flood, but most of us are oblivious to any real significance of the rain.

Did you know; When you are looking at a rainbow, God is looking at it too? 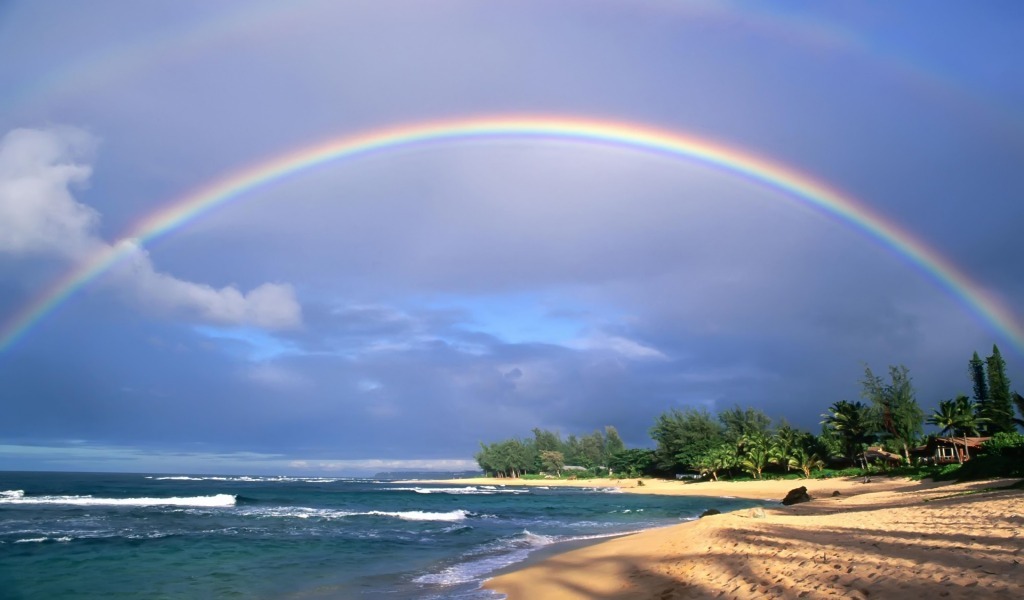 16 Whenever the rainbow appears in the clouds, I will see it and remember the everlasting covenant between God and all living creatures of every kind on the earth.”

Clouds and rainbows are first mentioned after the flood here in Genesis chapter 9. Perhaps this adds support to the view that there was no rain before the flood.

Regarding the shaking of the earth - earthquakes;

Read more: The Rapture and the Tribulation - The Day of the Lord