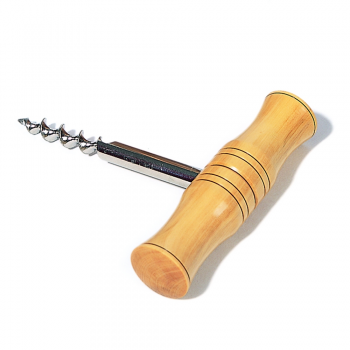 A twist in the tale

During the exile in Babylon, instead of God being mocked and discredited by the departure of his chosen people from his law, God exalts himself through the gentile kings of Babylon and Medo Persia.

It is fascinating to see the written decrees of King Nebuchadnezzar and of Darius the Mede and Cyrus the Persian. These gentile kings exalt the name of the God of Israel above all other gods in a way that the kings of Israel and Judah had failed to do so miserably. 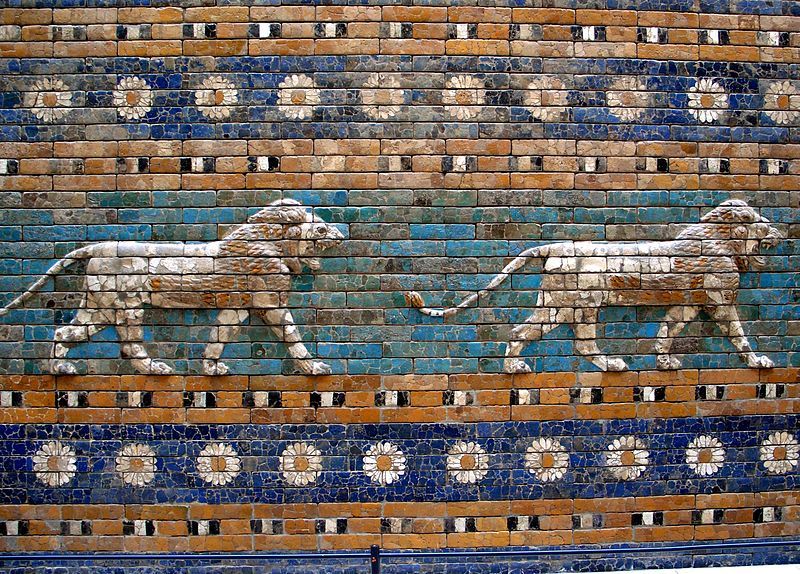 It is a great history lesson to see what the bible says about these ancient gentile superpowers and how they interact with the nation of Israel.

We can see that the God of creation is the God of human history. God is not at all perturbed as the remnant of Israel is exiled to Babylon inasmuch as he does not need to press any ‘panic button’ as if the situation is out of control.

On the contrary, God was about to demonstrate to Israel that if they chose to rebel against his commands, he could and would use other people to bring glory to his name.

God is sovereign, he reigns supreme, and he does not need anyone to fight his corner. What we are about to witness in the book of Daniel is astounding. God used the Gentile kings of Babylon and Medo-Persia to exalt his holy name to the world in a way that Israel had failed to do.

9 “This calls for a mind with wisdom. The seven heads are seven hills on which the woman sits. 10 They are also seven kings. Five have fallen, one is, the other has not yet come; but when he does come, he must remain for only a little while.

11 The beast who once was, and now is not, is an eighth king. He belongs to the seven and is going to his destruction.

The famous image below from Daniel chapter 2 depicts the giant statue in the dream of Nebuchadnezzar. 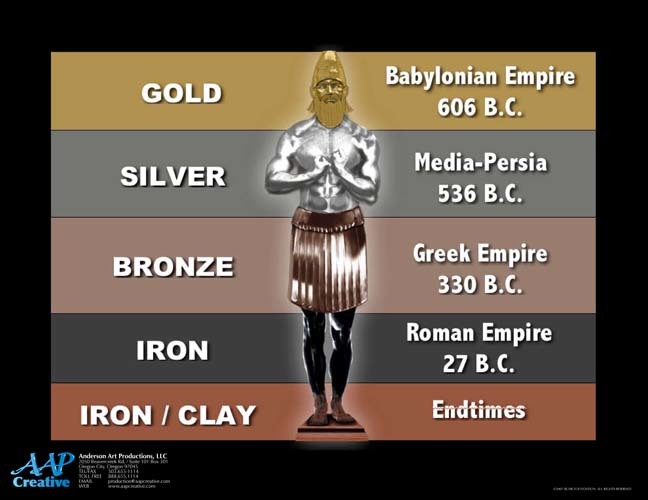 At this point of transition from the Old Testament to the New Testament I want to highlight that these six ancient empires and their kings are depicted in the above Scripture in the context of helping to interpret the end times.

5 Greece – personalised in Alexander the Great

THE OTHER - has not yet come: Antichrist

7 The new dominant world power – personalised in the Antichrist

He will consider himself to be - 'the direct human successor' - to the above list of world leaders from antiquity. He will be powerfully deluded by Satan, if not actually indwelt.

See link at the bottom of this page to read more on the Tribulation page.

The God of Daniel is supreme 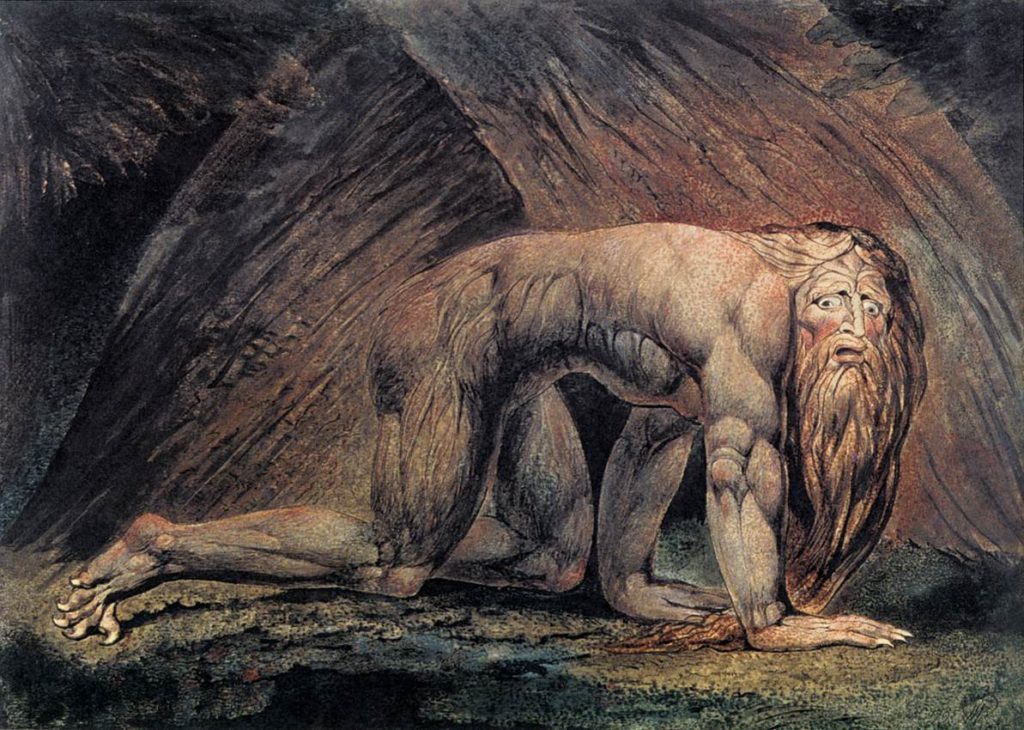 The great God has shown the king what will take place in the future. The dream is true and the interpretation is trustworthy.

Then King Nebuchadnezzar fell prostrate before Daniel and paid him honour and ordered that an offering and incense be presented to him.

The king said to Daniel, Surely your God is the God of gods and the Lord of kings and a revealer of mysteries, for you were able to reveal this mystery.

God alone can save

Then Nebuchadnezzar said, Praise be to the God of Shadrach, Meshach and Abednego, who has sent his angel and rescued his servants!

They trusted in him and defied the king’s command and were willing to give up their lives rather than serve or worship any god except their own God.

Therefore I decree that the people of any nation or language who say anything against the God of Shadrach, Meshach and Abednego be cut into pieces and their houses be turned into piles of rubble, for no other God can save in this way

Nebuchadnezzar acknowledged the God of heaven.

At the same time that my sanity was restored, my honour and splendour were returned to me for the glory of my kingdom. My advisers and nobles sought me out, and I was restored to my throne and became even greater than before.

Now I, Nebuchadnezzar, praise and exalt and glorify the King of heaven, because everything he does is right and all his ways are just. And those who walk in pride he is able to humble.

Darius acknowledged the God of Daniel as the living God

Then King Darius wrote to all the peoples, nations and men of every language throughout the land: May you prosper greatly! I issue a decree that in every part of my kingdom people must fear and reverence the God of Daniel.

For he is the living God and he endures forever; his kingdom will not be destroyed, his dominion will never end.

He rescues and he saves; he performs signs and wonders in the heavens and on the earth. He has rescued Daniel from the power of the lions

Daniel was around 86 years old when he was in the lion’s den!

Contrary to the notion of Daniel being a young man, he was old and had seen God working miracles in the land of Babylon where he was a senior administrator in government.

Daniel had witnessed firsthand how God had revealed himself to King Nebuchadnezzar of Babylon and also to King Darius the Mede.

Israel’s kings would reign no more, but God had his man in the right place at the right time. That man was Daniel.

Cyrus issues a decree on behalf of God.

“The LORD, the God of heaven, has given me all the kingdoms of the earth and he has appointed me to build a temple for him at Jerusalem in Judah.

Anyone of his people among you – may his God be with him, and let him go up to Jerusalem in Judah and build the temple of the LORD, the God of Israel, the God who is in Jerusalem.

And the people of any place where survivors may now be living are to provide him with silver and gold, with goods and livestock, and with freewill offerings for the temple of God in Jerusalem.”

The Northern Kingdom of Israel had failed and was now without a king. Her last king was King Hoshea - Israel was deported to Assyria under Shalmaneser in 720 BC.

The Southern Kingdom of Judah had also failed and was also without a king. Her last king was King Zedekiah - Judah was deported to Babylon under Nebuchadnezzar in 590 BC.

God was not without a witness. When his chosen people had forsaken him and disobeyed his laws, they suffered the punishment that was promised in Leviticus chapter 26.

God spoke to the world through the kings of these ancient Empires. His name was exalted to a higher level than the failed kingdoms of Israel and Judah had managed.

Now there would be a period of silence between the Old and New Testaments; a silence of over 500 years during which time the divided kingdoms of Israel and Judah would remain without a king.

"The crown will not be restored until he to whom it rightfully belongs shall come; to him I will give it."

This silence would be broken with the good news of the coming Messiah. Christ the Saviour of the world would fulfil the promise to Abraham, Isaac and Jacob. The announcement would be made that Jesus was 'born King' of the Jews. Matthew 2 v 2.

The nation of Israel has been without an earthly king ever since the twin deportations in 720 BC and 590 BC. Her next and only king will be during the Millennial reign of Christ when He will be recognised as King of kings and Lord of lords by Israel and all nations on earth.

All Nations will be blessed through him.

Regarding the Ancient Empires and how these are traced in Daniel and Revelation;

Read more: The Rapture and the Tribulation