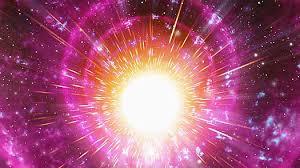 The sun is 400 times larger than the moon, so hypothetically speaking; If the sun was the size of a football, the moon would be smaller than a pin head!

The earth is circa 3.6 times bigger than the moon, so the next time you see a full moon, look up and imagine it to be the earth (as viewed from the moon) only 3.6 times bigger.

Perspective - if the moon resembles the diameter of a tea cup, the earth would be a dinner plate! This will allow you to visualise how close the earth is to the moon. Every time I look up at the moon, this is how I visualise it. I find this truly amazing.

If the earth and the moon were static objects and you could drive to the moon in a straight line at a constant speed of 60 mph, it would take 6 months to get there. By contrast, it would take 177 years to reach the sun!

Although the sun is 400 times larger than the moon, they are positioned at just the right distance in relation to the earth that the sun and the moon (the 'governing lights' of Genesis 1 v 14-19) appear to be the same size when viewed from the earth.

The recent eclipse 'totality' demonstrated this point perfectly when the moon displayed a perfect eclipse of the sun. Given the astounding disparity in size and distance from the earth, this is masterful genius displayed by God our creator.

The earth rotates on its axis at a speed of 460 metres per second or 1,000 miles per hour. It also orbits the sun at a staggering 30 km per second or 67,000 miles per hour. Although we are constantly rotating and travelling at these speeds, we have no sensation of this movement. The forces of gravity are perfectly balanced within our Solar System.

The moon orbits earth and as a result its distance from the sun constantly changes during its orbit. As a result of this, the temperature on the moon varies from – 170 degrees C to + 100 degrees C.

We can deduce from this that although the earth is circa 93,000,000 miles from the sun; if the earth was any closer to the sun we would burn up and if it was any further away, we would freeze.

Think of it; mankind has lived in a perpetual weekly cycle ever since historical records began. There has always been a calendar system of days and weeks and months and years. This is driven by our Solar System. It defies human intelligence and common logic to suggest that our Solar System is the result of some random 'Big Bang'.

The earth and moon are tiny when compared with the sun. And yet, despite the disparity in size and distance, God has these planets positioned in such a way that the two lights of Day 4 of the creation week, the Sun and Moon, look the same size when viewed from the earth! Awesome God!

bibletimeline.org.uk - is now live, use the link below and go to: