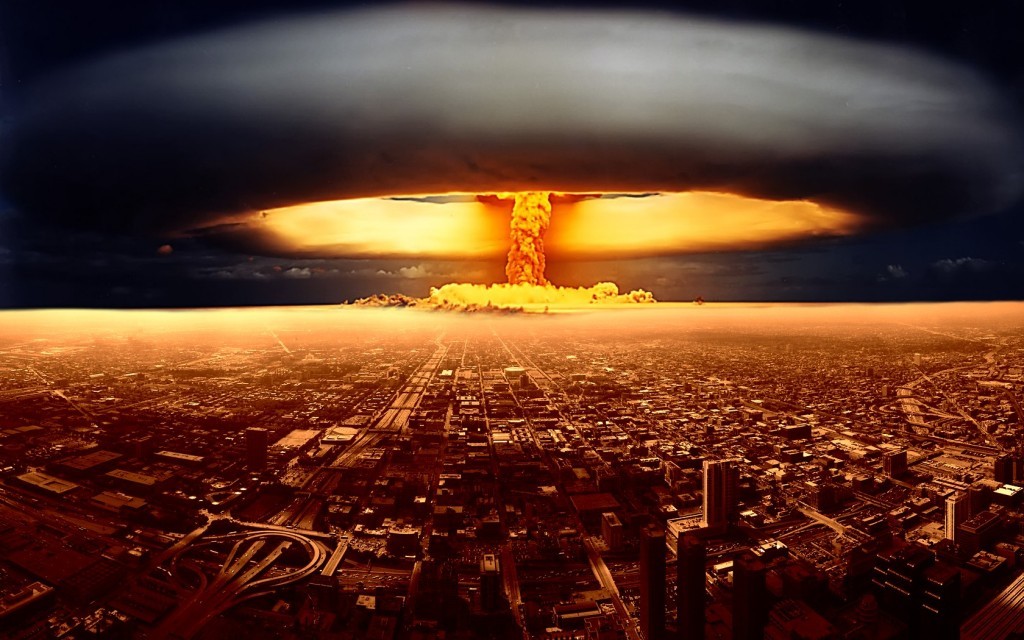 According to the bible; World War 3 will happen during the seven year Tribulation - soon after The Rapture has taken place. The bible doesn't actually call it WW 3, but it does talk about a great battle at a place called Armageddon - otherwise known as;

'The battle on the great day of God Almighty'

If you take time to look at 'The Rapture and the Tribulation' page on bibletimeline.org.uk, you will be in no doubt that the above statement is true. This great battle occurs at the end of the three stages of Judgment - it is in fact Bowl 6 of God's wrath.

Earth's population will be reduced by more than 50 per cent in less than 7 years! Over 3.5 billion people will die during the Tribulation; over 3,500 million souls will be swept into eternity during the Tribulation! Millions of people in the world today are oblivious to the reality of this biblical prophecy and the church is largely silent.

Revelation is not the only book in the bible that predicts these awful events; read this prophetic passage from Isaiah...

9 See, the day of the Lord is coming - a cruel day, with wrath and fierce anger - to make the land desolate and destroy the sinners within it. 10 The stars of heaven and their constellations will not show their light. The rising sun will be darkened and the moon will not give its light.

11 I will punish the world for its evil, the wicked for their sins. I will put an end to the arrogance of the haughty and will humble the pride of the ruthless. 12 I will make people scarcer than pure gold, more rare than the gold of Ophir.

13 Therefore I will make the heavens tremble; and the earth will shake from its place at the wrath of the Lord Almighty, in the day of his burning anger.

The Tribulation is a seven year period when God will judge this world and its inhabitants for all the sin and rebellion that has been demonstrated by mankind since the fall of man in the Garden of Eden.

Whether we think of homicide, genocide, war, greed, adultery, homosexuality, same sex partnerships, drug abuse, theft, lies, gossip, hatred, spite, envy or any other manifestation of sin; God is going to judge this world and the people in it.

In every extended age of human history; mankind has been in stubborn rebellion against the laws of God.

It is as simple as this; those who have refused to repent of their sins and have rejected Christ and his free gift of salvation, will come under the dreadful judgement of God.

After the Rapture it will only be a matter of time until the judgement of God begins to unfold. I say unfold because the period of the Tribulation will literally unfold a series of escalating judgments on mankind.

Universal deception will be orchestrated through the Antichrist that will affect all of mankind. There will be war on a global scale, famine, drought, and death will follow. The death toll will surpass that which was experienced in Noah’s flood and in World Wars 1 & 2.

There will be nuclear warfare; this is most likely to be triggered by countries that have a dictator style leadership rather than a democracy. All across the earth, hundreds of millions of people will die in a very short period of time.

There will be major astrological events; asteroids and meteorites will collide with earth and wreak havoc. Multiple enormous tsunamis will devastate coastlines across the continents. Water supplies will be contaminated and many millions of people will die as a result.

During stage one of the judgment; in Seal 4, one quarter of mankind is killed in a short period of time. Based on the current population of 7 billion; this equates to a staggering 1.75 billion. 1,750 million people will die as a result of Seal 4. Revelation 6 v 8.

In stage two of the judgment; in Trumpet 6, one third of mankind is killed. This happens to be the same number; One third of the remaining 5.25 billion is 1,750 million people! Revelation 9 v 15.

The apocalyptic terrors that are portrayed in films of the modern era such as - The Late Great Planet Earth, Deep Impact or Armageddon - will suddenly become a harsh reality. The horrors of an eternal hell will await those who refuse to repent.

1 The revelation from Jesus Christ, which God gave him to show his servants what must soon take place. He made it known by sending his angel to his servant John, 2 who testifies to everything he saw—that is, the word of God and the testimony of Jesus Christ.

3 Blessed is the one who reads aloud the words of this prophecy, and blessed are those who hear it and take to heart what is written in it, because the time is near.

Look, I am coming soon! Blessed is the one who keeps the words of the prophecy written in this scroll.

The Tribulation will unfold in three successive stages of judgment as outlined in detail in Revelation 6 v 1 to chapter 19 v 10.

You can read about the three stages of judgment and the staggering death toll on the Rapture and the Tribulation page.

Read More: The Rapture and the Tribulation