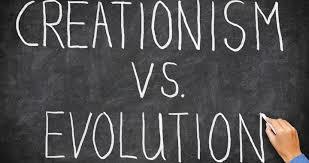 There are over 7 billion human beings on planet earth today. Millions or perhaps even billions of people believe in evolution. It is accepted as a fact of life; it goes almost unquestioned.

It was not until he was 50 years old, in 1859, that Charles Darwin finally published his theory of evolution in full for his fellow scientists and for the public at large. He did so in a 490 page book entitled - The Origin of the Species.

Charles Darwin was a human being just like you and I; the earth was spinning on its axis and orbiting the sun for 6 millennia before he was born and has continued doing so for the past 120 years or so since Darwin died.

Here’s the thing; since Darwin published his theory of evolution – and it is only a theory – there have been no biological or archaeological discoveries to actually prove his theory from start to finish. The opposite is the case.

The biblical record of Noah’s flood offers a more comprehensive explanation of the fossil record than Darwin’s theory of evolution.

It is likely that the earth’s topography was totally reshaped during the flood. It is almost unimaginable how devastating the global deluge was. It probably created new mountain ranges and changed entire continents as all the tectonic plates were convulsed and shifted beyond recognition.

Planet earth was totally submerged as the fountains of the great deep burst open and the flood gates of the heavens opened. As a result of the flood in circa 2350 BC, countless animals and mammals of all types and size were immediately swallowed up by these moving land masses.

From the many fossil collections across the world there are stunning examples of all kinds of fish, sea creatures, mammals and animals that were literally ‘frozen in time’ by the sudden devastation of the flood.

Their corpses, fully intact, were buried beneath layers of silt and rock and would lie preserved until they were unearthed again in a future day. There are examples of mating turtles and other creatures simply eating food when they were buried alive.

There are examples of fish and various sea creatures that were buried alive in seemingly bizarre places. According to the flood, these would have travelled beyond their normal boundaries as the earth was totally submerged with water.

Many of these would have been trapped in the mayhem and ended up displaced from their normal environment. They would be found totally preserved in a future day in what must have seemed the most unlikely places.

In short, it is no stretch of the imagination to say that the flood can account for all kinds of fossils.

“The impression that micro-evolution is limited in its scope is confirmed by the comments of Wesson and others to the effect that the fossil gives no good examples of macro-evolution. This will sound surprising to many people since it is a widespread public impression that one of the most powerful evidences for evolution comes from the fossil record. And yet this impression does not correspond to all that is to be found in the scientific literature.”

“Indeed, at the outset, some of Darwin’s strongest objectors were palaeontologists. He himself gives us the reason for this; it concerns the absence of the transitional forms in the fossil record, which his theory led him to expect.”

“He wrote in The Origin of the Species; ‘The number of intermediate varieties, which have formerly existed on the earth, {should} be truly enormous. Why then is not every geological formation and every stratum full of such intermediate links? Geology assuredly does not reveal any such graduated organic chain; and this, perhaps is the most obvious and gravest objection which can be urged against my theory.’”

“Zoologist Mark Ridley comments on the situation: ‘The fossil record of evolutionary change within single evolutionary lineages is very poor. If evolution is true, species originate through changes of ancestral species: one might expect to be able to see this in the fossil record. In fact it can rarely be seen. In 1859 Darwin could not cite a single example.’”

“What, then, is the result of nearly a century and a half of intensive activity, since Darwin’s time? Palaeontologist David Raup of the Field Museum of Natural History, which houses one of the largest fossil collections in the world, said: ‘We are now about 120 years after Darwin and the knowledge of the fossil record has been greatly expanded. We now have a quarter of a million fossil species, but the situation hasn’t changed much."

"The record of evolution is still surprisingly jerky and, ironically, we have even fewer examples of evolutionary transition than we had in Darwin’s time.’” End quote.

There we have it; there is no compelling evidence for transitional evolution within any known species. If there was, the New Atheists would be crowing from the tree tops, but they are conspicuously silent!

On the contrary, the thousands of individual fossils which have survived confirm the continuity of species. The fossil record actually lends weight to the creation account - and the Flood!

There is of course the following fundamental issue with Darwin’s theory of evolution; it gives no account or explanation whatsoever of the moral and spiritual dimensions of humanity. We are moral beings; we have a conscience and we are accountable for our actions. We are emotional beings who have the capacity to feel joy and sadness and we grieve at the loss of loved ones.

The bible account of creation in Genesis includes the physical, biological, moral and spiritual dimensions of human existence. We are eternal beings who are created in the likeness and image of God.

Charles Darwin, a human being just like us, has attempted to demote humanity to nothing more than an evolving species that originated from an unintelligent life form. All over the world his theory is taken as fact even although there is no hard evidence to prove it.