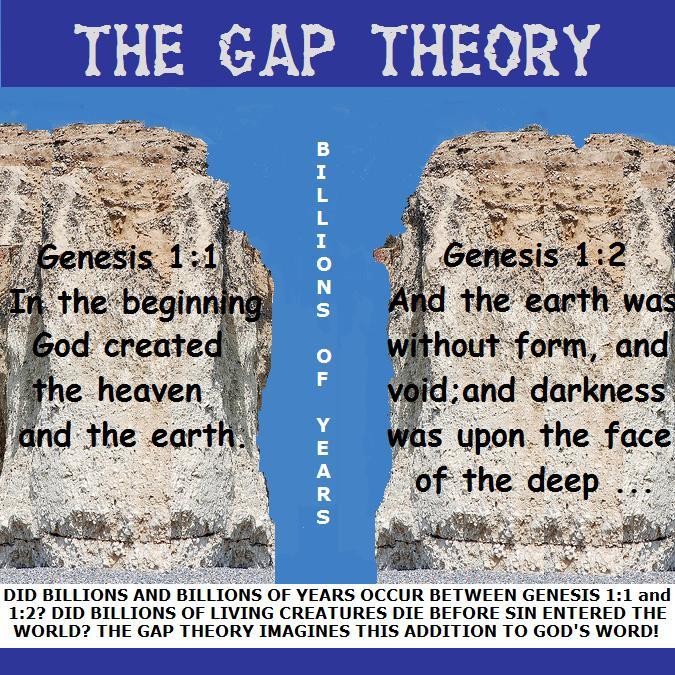 Gap creationism, also known as ruin-restoration creationism, restoration creationism, or "The Gap Theory", is a form of old Earth creationism that suggests that the six-day creation period, as outlined in the Book of Genesis, involved six literal 24-hour days, but that there was a gap of time between two distinct creations in the first and the second verses of Genesis. In other words, there is a very significant time gap between Genesis 1 v 1&2.

The theory is used to explain many scientific observations, including the ‘assumed' age of the earth and is favoured by those who want to make scripture ‘fit’ the prevailing scientific view that the earth and the universe are millions or billions of years old.

Gap creationism differs from day-age creationism, which claims that the 'days' of creation were much longer periods of perhaps thousands or millions of years, and from young Earth creationism, which although it agrees concerning the six literal 24-hour days of creation, does not suggest any gap of time between Genesis 1 v 1&2.

In support of ‘young earth creationism’ and in an effort to disprove Gap creationism, I cite the following scriptures;

“Haven’t you read, that at the beginning the creator made them male and female.”

“But at the beginning of creation God made them male and female.”

"Therefore, this generation will be held responsible for the blood of all the prophets that has been shed since the beginning of the world, from the blood of Abel to the blood of Zechariah, who was killed between the altar and the sanctuary."

There is a critical issue at stake here; according to scripture there is only one beginning with reference to creation. This particular observation supports the view of six literal 24-hour days in the creation week.

It seems apparent that the Lord Jesus makes no distinction between the initial act of creation in Genesis 1 v 1 and the progressive acts of creation in subsequent days of the creation week.

"In the beginning you laid the foundations of the earth..."

"Haven't you read, he replied, that at the beginning the creator made them male and female..."

"But at the beginning of creation God made them male and female."

"In the beginning, Lord, you laid the foundations of the earth..."

"This grace was given us in Christ Jesus before the beginning of time..."

"...in the hope of eternal life, which God, who does not lie, promised before the beginning of time..."

The above scriptures all refer to 'the' beginning and it seems to me that there is only one beginning - not two!

Professor John C Lennox is a well-known Christian author and has written the books listed below. I have learned a great deal from these and I am grateful for this. However, when it comes to the Gap Theory and the additional suggestion that the six days of the creation week may well have been separated by prolonged periods of time; frankly I respectfully disagree.

There are two pages on Bibletimeline which I invite you to explore;