24 And God said, “Let the land produce living creatures according to their kinds: the livestock, the creatures that move along the ground, and the wild animals, each according to its kind.” And it was so.

26 Then God said, “Let us make mankind in our image, in our likeness, so that they may rule over the fish in the sea and the birds in the sky, over the livestock and all the wild animals, and over all the creatures that move along the ground.”

28 God blessed them and said to them, “Be fruitful and increase in number; fill the earth and subdue it. Rule over the fish in the sea and the birds in the sky and over every living creature that moves on the ground.”

29 Then God said, “I give you every seed-bearing plant on the face of the whole earth and every tree that has fruit with seed in it. They will be yours for food.

30 And to all the beasts of the earth and all the birds in the sky and all the creatures that move along the ground—everything that has the breath of life in it—I give every green plant for food.” And it was so.

31 God saw all that he had made, and it was very good. And there was evening, and there was morning—the sixth day.

Here we see creation drawing to a conclusion. We see wild animals, livestock and creatures that move along the ground. Please note that there is clear distinction between the various groups.

All flesh is not the same, Men have one kind of flesh, animals have another, birds another and fish another.

There was absolute distinction between the various groups of birds, animals and creatures. Everything was made - 'according to its kind'. There is no hint of evolution here; quite the opposite in fact!

The point has of course been clearly established by some creationists that while there is no scriptural basis for evolution of the 'various kinds' of animals, i.e. evolution from one species to a different species; there has been evidence of mutation of genes within a particular species.

This explains how there are so many varieties of dogs and cattle and insects and so on. But a dog is still a dog, and a cow is still a cow etc.

Needless to say, that all through human history, and all across the earth, man is still man; he may be Caucasian, African or Indian but he is still man. There is no missing link and there is no tolerance whatsoever in the bible for any evolution of this kind.

Professor John C Lennox deals with this subject in a detailed manner in his book entitled 'God's Undertaker' - has science buried God?

In chapter 6 he discusses 'The nature and scope of evolution' where he touches on microevolution, macroevolution and the fossil record. It is a good read for anyone who wants an informed view on this subject.

Moses was the author of the Pentateuch under divine inspiration from God. Genesis and Exodus were most likely written during the two periods of forty days and nights on Mt Sinai. Genesis was written 1400 + BC which was circa 2600 years after creation took place.

Therefore, the so called ‘wild animals’ are referred to as ‘wild’ because at the time of writing they had become wild (post fall). However, at the time of creation these creatures would not have been ‘wild’ as the curse of the fall was not yet sanctioned.

Then God said, 'Let us make man in our image, in our likeness, and let them rule over the fish of the sea and the birds of the air, over the livestock, over all the earth, and over all the creatures that move along the ground.

There is no biblical basis for evolution because man was made at the beginning of creation and so did not evolve from primates or from mysterious tiny life forms. Male and female were made on the same day – Day 6.

Man was made in God's image and likeness. Man was a representative of God's authority on earth. This is implied in the command to rule over the fish of the sea, the birds of the air and over the livestock and all the creatures that move along the ground.

Adam is unique; he was made as a mature man. He did not experience birth, he was never in a mother's womb because he did not have a mother, he therefore did not need an umbilical cord and so it is unlikely that he would have had a 'belly button'.

He did not experience childhood or adolescence. God made man.

Man is unique in creation. He is different from all the other creatures. We have an appreciation of art, medicine, architecture, design, reason, debate, morality and beauty. Animals do not.

We live our lives by calendar days, weeks, months and years. Animals do not.

We wear watches to monitor time, and we use satellites to forecast the weather and we celebrate birthdays. Animals do not.

For further evidence of man’s uniqueness we can look at modern security systems and I.D. processing which depend on recognition of the human voice, finger prints and eye retina. These all point to the uniqueness of the individual.

This is not a product of random evolution; these are indications of design by a supreme creator. The amazing thing is this; God created you as an individual and he wants to have a relationship with you.

Adam names the animals and birds 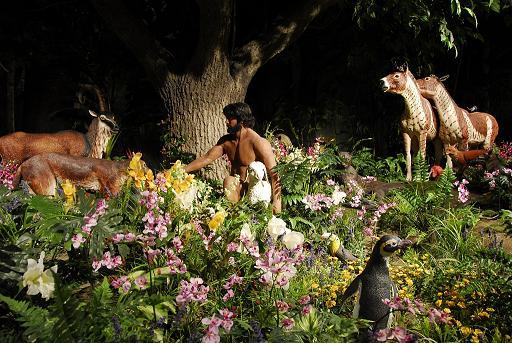 On Day 6 of the creation week, God gave Adam a task that many would think impossible to execute within the first day of Adam's life.

He was asked to name all the animals and birds. At first this seems an enormous task but after some brief consideration I am satisfied that this was completed in good time and in a relaxed manner.

The text states that God brought the animals and birds to Adam so this would make the task much easier. God did the same thing with Noah while the ark was being built. You can read about this astonishing phenomenon on the Flood page.

Not only was this task made easier with God's assistance in bringing the animals and birds to Adam; Adam was endowed with an astonishing sense of imagination, intelligence and wisdom to go with it.

Adam was made in the image of God and at this point in time he was in unhindered fellowship with the Almighty creator God - at this time Adam was sinless.

In Deuteronomy 14, Moses gives a comprehensive list of all the animals and birds that the Israelites were permitted to eat and those that were prohibited. It is an extensive list, not exhaustive, and can easily be read in two minutes.

This task was completed with ease in the presence of God the creator - what a wonderful experience this must have been for Adam. The big question that needs to be addressed throughout this creation page is this: Do I believe the bible, and the underlying question is; do I believe God?

1 Thus the heavens and the earth were completed in all their vast array. 2 By the seventh day God had finished the work he had been doing; so on the seventh day he rested from all his work.

3 Then God blessed the seventh day and made it holy, because on it he rested from all the work of creating that he had done.

I suggest that the natural flow of the text implies that when the creation week was completed, there was a mature universe, a mature solar system with mature planets, a mature earth with mature vegetation, mature animals and a mature man and woman.

A friend said to me recently; "What we have here is a - working model". I think that sums it up nicely.

Surely the natural reading and flow of these verses is that God's work of creation was completed in the six day creation week and thus he proclaims; finished! Thus God rested.

If the process of creation took place over an extended period of tens of thousands or millions of years, rather than six literal days, the idea of God resting at its completion looses any real significance.

7 So, as the Holy Spirit says: “Today, if you hear his voice, 8 do not harden your hearts as you did in the rebellion, during the time of testing in the wilderness, 9 where your ancestors tested and tried me, though for forty years they saw what I did.

10 That is why I was angry with that generation; I said, 'Their hearts are always going astray, and they have not known my ways.' 11 So I declared on oath in my anger, 'They shall never enter my rest.'

12 See to it, brothers and sisters, that none of you has a sinful, unbelieving heart that turns away from the living God. 13 But encourage one another daily, as long as it is called “Today,” so that none of you may be hardened by sin’s deceitfulness.

14 We have come to share in Christ, if indeed we hold our original conviction firmly to the very end. 15 As has just been said: “Today, if you hear his voice, do not harden your hearts as you did in the rebellion."

16 Who were they who heard and rebelled? Were they not all those Moses led out of Egypt? 17 And with whom was he angry for forty years? Was it not with those who sinned, whose bodies perished in the wilderness?

18 And to whom did God swear that they would never enter his rest if not to those who disobeyed? 19 So we see that they were not able to enter, because of their unbelief.

We have already pointed out that it is by faith that we understand that the the universe was formed at God's command. Hebrews 11 v 1-3.

It requires faith to understand how God created the heavens and the earth. Remove faith from this process and we are stuck in the mud.

As we conclude these brief considerations regarding the creation of the universe, it seems to me that the central issue is not so much how we view creation in terms of the 'created things' that we see, but rather - how we view the God who created all things.

If we do interpret Genesis chapter 1 as a creation week consisting of six literal days, then we must conclude that the God of creation is indeed the supreme and only God over all who is from everlasting to everlasting and that he alone is to be worshiped and obeyed.

We must also conclude that this God is beyond our understanding and that he is more powerful and more wise than we can comprehend.

Read more: Adam is unique - What no belly button!