The Birth and Childhood of Christ

Jesus was announced by angels

18 This is how the birth of Jesus the Messiah came about; His mother Mary was pledged to be married to Joseph, but before they came together, she was found to be pregnant through the Holy Spirit.

19 Because Joseph her husband was a righteous man and did not want to expose her to public disgrace, he had in mind to divorce her quietly. 20 But after he had considered this, an angel of the Lord appeared to him in a dream and said, “Joseph son of David, do not be afraid to take Mary home as your wife, because what is conceived in her is from the Holy Spirit.

21 She will give birth to a son, and you are to give him the name Jesus, 21 Jesus is the Greek form of Joshua, which means the Lord saves - because he will save his people from their sins.”

22 All this took place to fulfill what the Lord had said through the prophet: 23 “The virgin will conceive and give birth to a son, and they will call him Immanuel” 23 Isaiah 7:14 (which means “God with us”).

After Jesus was born in Bethlehem in Judea, during the time of King Herod, Magi from the east came to Jerusalem and asked, “Where is the one who has been born king of the Jews?”

The Baby Jesus Presented at the Temple

25 Now there was a man in Jerusalem called Simeon, who was righteous and devout. He was waiting for the consolation of Israel, and the Holy Spirit was on him. 26 It had been revealed to him by the Holy Spirit that he would not die before he had seen the Lord’s Messiah.

27 Moved by the Spirit, he went into the temple courts. When the parents brought in the child Jesus to do for him what the custom of the Law required, 28 Simeon took him in his arms and praised God, saying: 29 “Sovereign Lord, as you have promised, you may now dismiss your servant in peace.

30 For my eyes have seen your salvation, 31 which you have prepared in the sight of all nations: 32 a light for revelation to the Gentiles, and the glory of your people Israel.”

33 The child’s father and mother marvelled at what was said about him. 34 Then Simeon blessed them and said to Mary, his mother: “This child is destined to cause the falling and rising of many in Israel, and to be a sign that will be spoken against, 35 so that the thoughts of many hearts will be revealed. And a sword will pierce your own soul too.”

The Boy Jesus found at the Temple

41 Every year Jesus’ parents went to Jerusalem for the Festival of the Passover. 42 When he was twelve years old, they went up to the festival, according to the custom.

43 After the festival was over, while his parents were returning home, the boy Jesus stayed behind in Jerusalem, but they were unaware of it.

44 Thinking he was in their company, they travelled on for a day. Then they began looking for him among their relatives and friends.

45 When they did not find him, they went back to Jerusalem to look for him. 46 After three days they found him in the temple courts, sitting among the teachers, listening to them and asking them questions.

47 Everyone who heard him was amazed at his understanding and his answers.

48 When his parents saw him, they were astonished. His mother said to him, “Son, why have you treated us like this? Your father and I have been anxiously searching for you.”

“Didn’t you know I had to be in my Father’s house?”

50 But they did not understand what he was saying to them. 51 Then he went down to Nazareth with them and was obedient to them. But his mother treasured all these things in her heart. 52 And Jesus grew in wisdom and stature, and in favour with God and man.

Jesus (the last Adam) experienced what the first Adam never experienced; Jesus was born as a baby and was totally dependent on his mother. He grew up from infancy into childhood and eventually into manhood before he was revealed to the world in his public ministry. Adam was made as a mature man.

Throughout this long period of growing up under the watchful eye of his parents, he was also being observed by his heavenly Father. Isaiah sums up God's perspective like this:

He grew up before him like a tender shoot, and like a root out of dry ground. He had no beauty or majesty to attract us to him, nothing in his appearance that we should desire him. 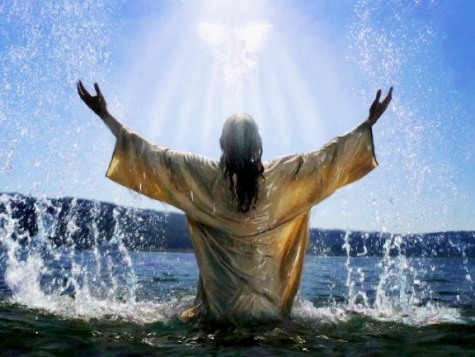 The baptism of Jesus for public ministry

16 As soon as Jesus was baptized, he went up out of the water. At that moment heaven was opened, and he saw the Spirit of God descending like a dove and alighting on him. 17 And a voice from heaven said,

“This is my Son, whom I love; with him I am well pleased.”

He was announced by God the Father at his baptism with a voice from heaven.

As we have already discussed on the Creation Page: Atoms, molecules and DNA are a great scientific discovery and we can benefit from this in many ways; however, their function is not central in the message of the gospel.

Christ the WORD, the eternal Son of God, the second person of the blessed Trinity, who existed before the creation of the universe, came into time and took on flesh.

This is hallowed ground!

Humanly speaking, and as far as science is concerned, He came into time and took on flesh, the eternal one took on a physical form that was made up of particles, molecules, atoms and DNA.

When we talk about the condescension of Christ our Saviour; this is what he did. He revealed his glory through his life and miracles. The creator God of the universe became a man in order that he could identify with his fallen creation and provide salvation for mankind.

And wonder of wonders; God the eternal Son, will remain a man - the last Adam - for all eternity! We will gaze on him and be filled with wonder at his condescension.