The Death of Christ 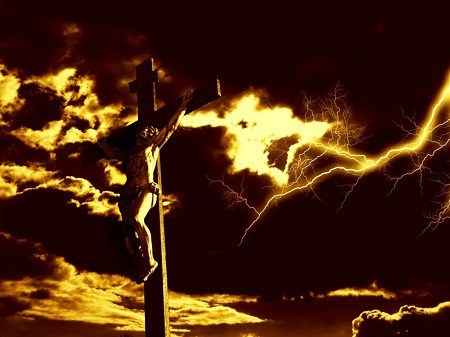 The soldiers mock Jesus – The creator is abused by his creatures!

27 Then the governor’s soldiers took Jesus into the Praetorium and gathered the whole company of soldiers around him. 28 They stripped him and put a scarlet robe on him, 29 and then twisted together a crown of thorns and set it on his head. They put a staff in his right hand. Then they knelt in front of him and mocked him. “Hail, king of the Jews!” they said.

30 They spit on him, and took the staff and struck him on the head again and again. 31 After they had mocked him, they took off the robe and put his own clothes on him. Then they led him away to crucify him.

The crucifixion of Jesus

32 As they were going out, they met a man from Cyrene, named Simon, and they forced him to carry the cross. 33 They came to a place called Golgotha (which means “the place of the skull”).

34 There they offered Jesus wine to drink, mixed with gall; but after tasting it, he refused to drink it. 35 When they had crucified him, they divided up his clothes by casting lots. 36 And sitting down, they kept watch over him there. 37 Above his head they placed the written charge against him:

"THIS IS JESUS THE KING OF THE JEWS".

38 Two rebels were crucified with him, one on his right and one on his left. 39 Those who passed by hurled insults at him, shaking their heads 40 and saying, “You who are going to destroy the temple and build it in three days, save yourself! Come down from the cross, if you are the Son of God!”

41 In the same way the chief priests, the teachers of the law and the elders mocked him. 42 “He saved others,” they said, “but he can’t save himself! He’s the king of Israel! Let him come down now from the cross, and we will believe in him.

43 He trusts in God. Let God rescue him now if he wants him, for he said, ‘I am the Son of God.’ ” 44 In the same way the rebels who were crucified with him also heaped insults on him.

The death of Jesus

47 When some of those standing there heard this, they said, “He’s calling Elijah.” 48 Immediately one of them ran and got a sponge. He filled it with wine vinegar, put it on a staff, and offered it to Jesus to drink. 49 The rest said, “Now leave him alone. Let’s see if Elijah comes to save him.”

50 And when Jesus had cried out again in a loud voice, he gave up his spirit.

51 At that moment the curtain of the temple was torn in two from top to bottom. The earth shook; the rocks split 52 and the tombs broke open. The bodies of many holy people who had died were raised to life.

53 They came out of the tombs after Jesus’ resurrection and went into the holy city and appeared to many people.

54 When the centurion and those with him who were guarding Jesus saw the earthquake and all that had happened, they were terrified, and exclaimed,

“Surely he was the Son of God!”

55 Many women were there, watching from a distance. They had followed Jesus from Galilee to care for his needs. 56 Among them were Mary Magdalene, Mary the mother of James and Joseph, and the mother of Zebedee’s sons. 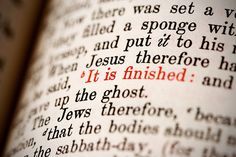 Later, knowing that all was now completed, and so that the Scripture would be fulfilled, Jesus said, “I am thirsty.” A jar of wine vinegar was there, so they soaked a sponge in it, put the sponge on a stalk of the hyssop plant, and lifted it to Jesus’ lips.

When he had received the drink, Jesus said,

With that, he bowed his head and gave up his spirit.

Here in this hallowed moment where time met with eternity, Christ looks back to Genesis chapter 3 – The Garden of Eden - where Adam and Eve had disobeyed God’s command and brought sin into the world which he had created.

Not only does he look back, but he also looks forward to Revelation chapter 21 – to the new heaven and the new earth – where God will finally dwell among his people in perfect holiness and happiness, sin being destroyed; and he cries out in triumph –

During those three hours of darkness on the cross, Christ in restrained humility, unsurpassed grace and righteous dignity, refuses to come down from the cross.

There he was alone, all alone, rejected by his own nation, the people of Israel, mocked and abused by the Gentile authorities and soldiers, deserted by his disciples, forgotten by all those whom he had healed, and above all, forsaken by God the Father with whom he had shared a past eternity of bliss before creation came into being.

Surely he took up our infirmities and carried our sorrows, yet we considered him stricken by God, smitten by him and afflicted.

But he was pierced for our transgressions, he was crushed for our iniquities; the punishment that brought us peace was upon him, and by his wounds we are healed.

9 The true light that gives light to everyone was coming into the world. 10 He was in the world, and though the world was made through him, the world did not recognize him.

11 He came to that which was his own, but his own did not receive him. 12 Yet to all who did receive him, to those who believed in his name, he gave the right to become children of God—13 children born not of natural descent, nor of human decision or a husband’s will, but born of God.

14 The Word became flesh and made his dwelling among us. We have seen his glory, the glory of the one and only Son, who came from the Father, full of grace and truth.

God made him who had no sin to be sin for us, so that in him we might become the righteousness of God.

Day after day every priest stands and performs his religious duties; again and again he offers the same sacrifices, which can never take away sins. But when this priest (Christ) had offered for all time one sacrifice for sins, he sat down at the right hand of God.

Every single animal that was ever sacrificed in the Old Testament, repeated endlessly year after year, pointed forward to this very moment in time when Christ would be the acceptable sacrifice for sins.

So, what was finished, when Jesus cried “Finished!” on the cross?

Well, for starters, the old system of animal sacrifice was finished. There was no longer any need to sacrifice animals as atonement in the sin offerings of the old Tabernacle and Temple. Christ had now come; he was the fulfilment of the Levitical offerings of the Old Testament.

The curtain of the temple which barred access to the Most Holy Place was now torn in two from top to bottom. It was God who tore it from the top. Jesus had now opened a new way to God as he had said: I am the way!

The Most Holy place in the Tabernacle of the Old Testament was forbidden territory except for the High Priest. He could only enter once a year, and not without blood.

At the precise moment of Christ's death, when he cried - Finished! - the curtain was torn open by God. Christ had opened the way for sinners to enter into the presence of God.

But we can now receive forgiveness for all our sins through the blood of Christ. He offers us real forgiveness that cleanses us from sin and presents us as acceptable to God. We are effectively hidden and sheltered in Christ, covered by his blood and sacrifice.

Christ was punished for our sins and so we can be set free from the punishment that we deserve.

Not only so, but we can also receive a new righteousness, a standing before God in Christ that makes us acceptable to God and welcome in his holy presence.

Well, we need to provide answers to these questions.

First; all of the sin and evil that is in the world today is our fault not God’s. It was Adam and Eve who sinned. It is mankind who is sinful and rebellious against God’s laws.

Second; God has actually fixed the problem. That is why Christ died.

The big question is this:

What will you do with Christ?

Or will you do what mankind has been doing since the fall of man in Genesis, and resist the gospel in selfish independence?

The choice is yours, you are free to decide, but you will also reap the consequences of your decision. God will not force himself on anyone.