The Miracles of Christ 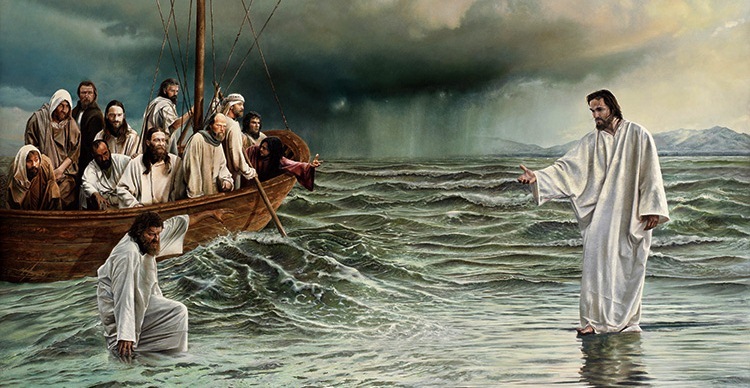 23 Then he got into the boat and his disciples followed him. 24 Suddenly a furious storm came up on the lake, so that the waves swept over the boat. But Jesus was sleeping. 25 The disciples went and woke him, saying, “Lord, save us! We’re going to drown!”

Jesus Walks on the Water

22 Immediately Jesus made the disciples get into the boat and go on ahead of him to the other side, while he dismissed the crowd.

23 After he had dismissed them, he went up on a mountainside by himself to pray. Later that night, he was there alone, 24 and the boat was already a considerable distance from land, buffeted by the waves because the wind was against it.

25 Shortly before dawn Jesus went out to them, walking on the lake.

26 When the disciples saw him walking on the lake, they were terrified. “It’s a ghost,” they said, and cried out in fear. 27 But Jesus immediately said to them: “Take courage! It is I. Don’t be afraid.”

30 But when he saw the wind, he was afraid and, beginning to sink, cried out, “Lord, save me!” 31 Immediately Jesus reached out his hand and caught him. “You of little faith,” he said, “why did you doubt?”

32 And when they climbed into the boat, the wind died down.

33 Then those who were in the boat worshiped him, saying,

“Truly you are the Son of God.”

1 On the third day a wedding took place at Cana in Galilee. Jesus’ mother was there, 2 and Jesus and his disciples had also been invited to the wedding. 3 When the wine was gone, Jesus’ mother said to him, “They have no more wine.”

5 His mother said to the servants, “Do whatever he tells you.” 6 Nearby stood six stone water jars, the kind used by the Jews for ceremonial washing, each holding from twenty to thirty gallons. 7 Jesus said to the servants “Fill the jars with water”; so they filled them to the brim.

Then he called the bridegroom aside 10 and said, “Everyone brings out the choice wine first and then the cheaper wine after the guests have had too much to drink; but you have saved the best till now.”

11 What Jesus did here in Cana of Galilee was the first of the signs through which he revealed his glory; and his disciples believed in him. 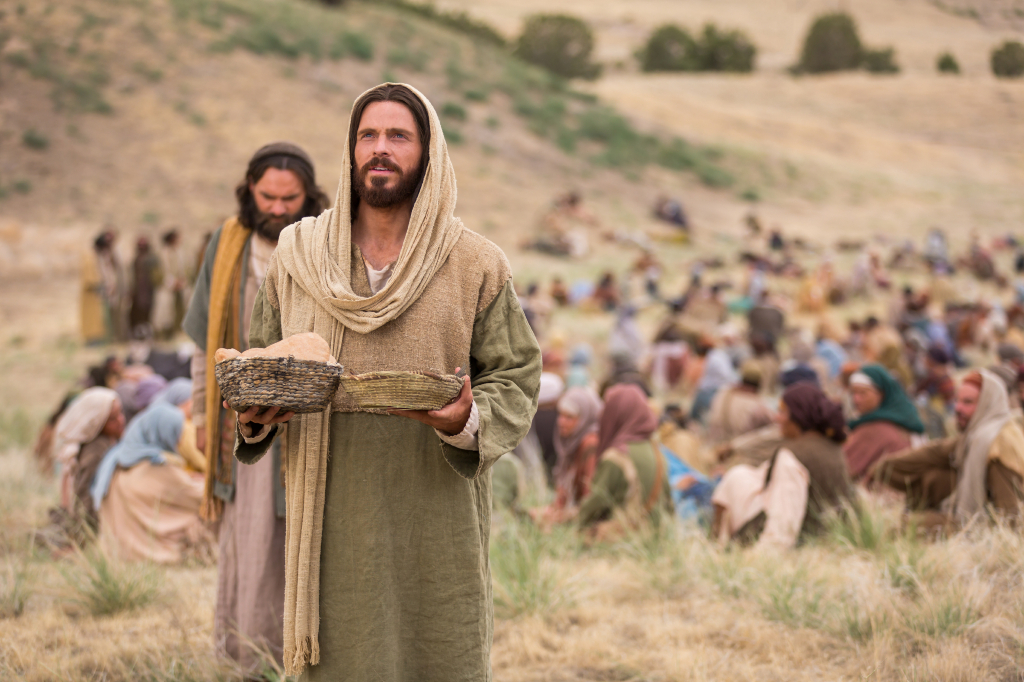 13 When Jesus heard what had happened, he withdrew by boat privately to a solitary place. Hearing of this, the crowds followed him on foot from the towns. 14 When Jesus landed and saw a large crowd, he had compassion on them and healed their sick.

15 As evening approached, the disciples came to him and said, “This is a remote place, and it’s already getting late. Send the crowds away, so they can go to the villages and buy themselves some food.”

16 Jesus replied, “They do not need to go away. You give them something to eat.” 17 “We have here only five loaves of bread and two fish,” they answered. 18 “Bring them here to me,” he said.

20 They all ate and were satisfied, and the disciples picked up twelve basketfuls of broken pieces that were left over.

21 The number of those who ate was about five thousand men, besides women and children.

29 As soon as they left the synagogue, they went with James and John to the home of Simon and Andrew. 30 Simon’s mother-in-law was in bed with a fever, and they immediately told Jesus about her.

31 So he went to her, took her hand and helped her up. The fever left her and she began to wait on them. 32 That evening after sunset the people brought to Jesus all the sick and demon-possessed.

33 The whole town gathered at the door, 34 and Jesus healed many who had various diseases. He also drove out many demons, but he would not let the demons speak because they knew who he was.

Jesus Raises a Dead Girl and Heals a Sick Woman

18 While he was saying this, a synagogue leader came and knelt before him and said, “My daughter has just died. But come and put your hand on her, and she will live.” 19 Jesus got up and went with him, and so did his disciples.

20 Just then a woman who had been subject to bleeding for twelve years came up behind him and touched the edge of his cloak. 21 She said to herself, “If I only touch his cloak, I will be healed.”

22 Jesus turned and saw her. “Take heart, daughter,” he said, “your faith has healed you.” And the woman was healed at that moment.

23 When Jesus entered the synagogue leader’s house and saw the noisy crowd and people playing pipes, 24 he said, “Go away. The girl is not dead but asleep.”But they laughed at him.

25 After the crowd had been put outside, he went in and took the girl by the hand, and she got up. 26 News of this spread through all that region. 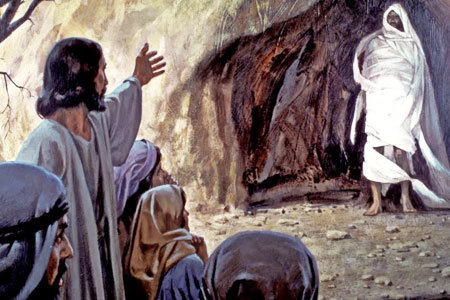 Jesus raises Lazarus from the dead

38 Jesus, once more deeply moved, came to the tomb. It was a cave with a stone laid across the entrance. 39 “Take away the stone,” he said. “But, Lord,” said Martha, the sister of the dead man, “by this time there is a bad odour, for he has been there four days.”

40 Then Jesus said, “Did I not tell you that if you believe, you will see the glory of God?” 41 So they took away the stone. Then Jesus looked up and said, “Father, I thank you that you have heard me.

42 I knew that you always hear me, but I said this for the benefit of the people standing here, that they may believe that you sent me.”

43 When he had said this, Jesus called in a loud voice, “Lazarus, come out!” 44 The dead man came out, his hands and feet wrapped with strips of linen, and a cloth around his face. Jesus said to them, “Take off the grave clothes and let him go.”

28 When he arrived at the other side in the region of the Gadarenes, two demon-possessed men coming from the tombs met him. They were so violent that no one could pass that way.

29 “What do you want with us, Son of God?” they shouted. “Have you come here to torture us before the appointed time?”

30 Some distance from them a large herd of pigs was feeding. 31The demons begged Jesus, “If you drive us out, send us into the herd of pigs.”

32 He said to them, “Go!” So they came out and went into the pigs, and the whole herd rushed down the steep bank into the lake and died in the water.

33 Those tending the pigs ran off, went into the town and reported all this, including what had happened to the demon-possessed men. 34 Then the whole town went out to meet Jesus. And when they saw him, they pleaded with him to leave their region.

14 When they came to the crowd, a man approached Jesus and knelt before him. 15 “Lord, have mercy on my son,” he said. “He has seizures and is suffering greatly. He often falls into the fire or into the water. 16 I brought him to your disciples, but they could not heal him.”

18 Jesus rebuked the demon, and it came out of the boy, and he was healed at that moment.

19 Then the disciples came to Jesus in private and asked, “Why couldn’t we drive it out?” 20 He replied, “Because you have so little faith. Truly I tell you, if you have faith as small as a mustard seed, you can say to this mountain, ‘Move from here to there,’ and it will move. Nothing will be impossible for you.” 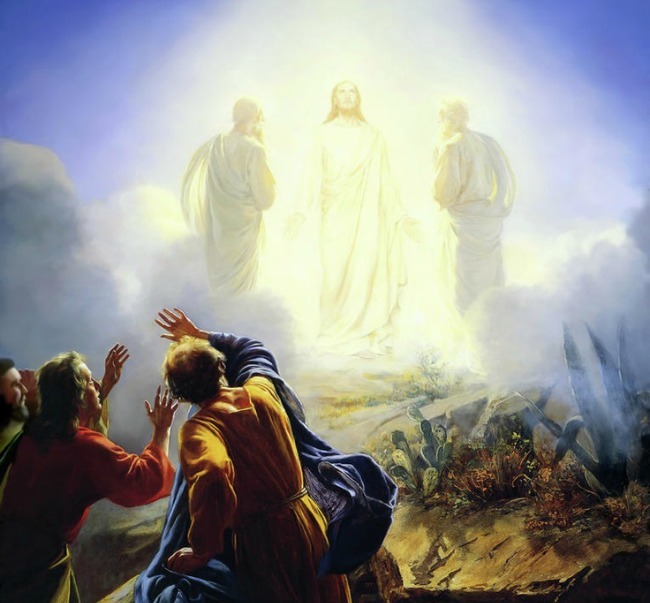 1 After six days Jesus took with him Peter, James and John the brother of James, and led them up a high mountain by themselves.

2 There he was transfigured before them. His face shone like the sun, and his clothes became as white as the light.

3 Just then there appeared before them Moses and Elijah, talking with Jesus.

4 Peter said to Jesus, “Lord, it is good for us to be here. If you wish, I will put up three shelters—one for you, one for Moses and one for Elijah.”

5 While he was still speaking, a bright cloud covered them, and a voice from the cloud said, “This is my Son, whom I love; with him I am well pleased. Listen to him!”

6 When the disciples heard this, they fell face down to the ground, terrified. 7 But Jesus came and touched them. “Get up,” he said. “Don’t be afraid.”

8 When they looked up, they saw no one except Jesus.

9 As they were coming down the mountain, Jesus instructed them, “Don’t tell anyone what you have seen, until the Son of Man has been raised from the dead.”

The miracles of Christ are recorded in the bible as proof of the fact that He is who He claimed to be - the Son of the living God. John 10 v 30, Jesus said, "I and the Father are one."