The Gentiles receive the Gospel

34 Then Peter began to speak: “I now realize how true it is that God does not show favouritism 35 but accepts from every nation the one who fears him and does what is right.

36 You know the message God sent to the people of Israel, announcing the good news of peace through Jesus Christ, who is Lord of all.

37 You know what has happened throughout the province of Judea, beginning in Galilee after the baptism that John preached - 38 how God anointed Jesus of Nazareth with the Holy Spirit and power, and how he went around doing good and healing all who were under the power of the devil, because God was with him.

39 “We are witnesses of everything he did in the country of the Jews and in Jerusalem. They killed him by hanging him on a cross, 40 but God raised him from the dead on the third day and caused him to be seen.

41 He was not seen by all the people, but by witnesses whom God had already chosen - by us who ate and drank with him after he rose from the dead. 42 He commanded us to preach to the people and to testify that he is the one whom God appointed as judge of the living and the dead. 43 All the prophets testify about him that everyone who believes in him receives forgiveness of sins through his name.”

44 While Peter was still speaking these words, the Holy Spirit came on all who heard the message. 45 The circumcised believers who had come with Peter were astonished that the gift of the Holy Spirit had been poured out even on Gentiles.

46 For they heard them speaking in tongues and praising God. Then Peter said, 47 “Surely no one can stand in the way of their being baptized with water. They have received the Holy Spirit just as we have.” 48 So he ordered that they be baptized in the name of Jesus Christ. Then they asked Peter to stay with them for a few days.

17 So if God gave them the same gift he gave us who believed in the Lord Jesus Christ, who was I to think that I could stand in God’s way?” 18 When they heard this, they had no further objections and praised God, saying, “So then, even to Gentiles God has granted repentance that leads to life.”

The gospel for all nations

This was the real turning point in the Gospel story. Actually, it ought not to have come as a surprise at all. On the ‘Rise of Israel’ page - we have considered the promise to Abraham, Isaac and Jacob;

- it was that ‘All Nations would be blessed’ through Abraham, the man of faith. This promise was now being fulfilled. God is true to his word.

This single encounter opened the door for the Gospel to be preached all over the world. When Jesus was talking to the Samaritan woman (John 4 v 22) he said,

“Salvation is from the Jews.”

Sometimes I get the impression that we, in the Western world, assume some sort of title to the Gospel. Actually, we need to remind ourselves of how we came to hear the Gospel as outlined in this passage.

The significant turning point in this event is that these Gentile believers received the gift of Salvation and the promised Holy Spirit - without being converted to Judaism!

The universal church was born at this time and it would embrace all; it would have no distinction in race, colour, gender or social class.

The Church in Antioch 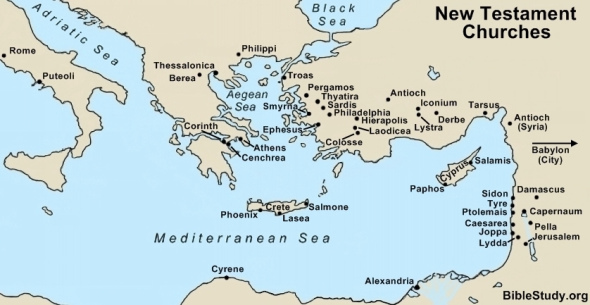 History of the early church - compelling

19 Now those who had been scattered by the persecution that broke out when Stephen was killed travelled as far as Phoenicia, Cyprus and Antioch, spreading the word only among Jews.

20 Some of them, however, men from Cyprus and Cyrene, went to Antioch and began to speak to Greeks also, telling them the good news about the Lord Jesus. 21 The Lord’s hand was with them, and a great number of people believed and turned to the Lord.

22 News of this reached the church in Jerusalem, and they sent Barnabas to Antioch. 23 When he arrived and saw what the grace of God had done, he was glad and encouraged them all to remain true to the Lord with all their hearts.

24 He was a good man, full of the Holy Spirit and faith, and a great number of people were brought to the Lord. 25 Then Barnabas went to Tarsus to look for Saul, 26 and when he found him, he brought him to Antioch.

So for a whole year Barnabas and Saul met with the church and taught great numbers of people.

The disciples were called Christians first at Antioch.

26 So in Christ Jesus you are all children of God through faith, 27 for all of you who were baptized into Christ have clothed yourselves with Christ.

28 There is neither Jew nor Gentile, neither slave nor free, nor is there male and female, for you are all one in Christ Jesus.

29 If you belong to Christ, then you are Abraham’s seed, and heirs according to the promise.

The next time you drive past a church, or the next time you attend church, just take a moment to think of the heritage that we have received from our spiritual ancestors in the book of Acts.

« Previous Page The Fellowship of Believers Next Page » Conclusion