A nation beginning to multiply 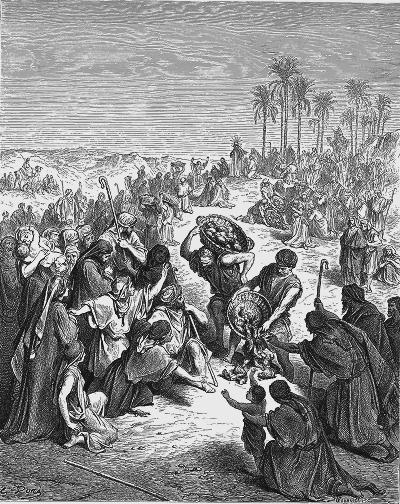 Now Joseph and all his brothers and all that generation died, but the Israelites were fruitful and multiplied greatly and became exceedingly numerous, so that the land was filled with them.

Then a new king, who did not know about Joseph, came to power in Egypt. “Look,” he said to his people, “the Israelites have become too numerous for us.

Come, we must deal shrewdly with them or they will become even more numerous and, if war breaks out, will join our enemies, fight against us and leave the country.”

So they put slave masters over them to oppress them with forced labour, and they built Pithom and Rameses as store cities for Pharaoh. But the more they were oppressed, the more they multiplied and spread; so the Egyptians came to dread the Israelites and worked them ruthlessly.

They made their lives bitter with hard labour in brick and mortar and with all kinds of work in the fields; in all their hard labour the Egyptians used them ruthlessly.

It is sad to think that a new Pharaoh could come to power in Egypt and yet be unaware of what had made his kingdom so great in the first place.

Genesis chapters 41-47 tell the story of the famine that ravaged the Middle East and Egypt. Had it not been for God moving through Joseph in response to Pharaoh’s dreams; Egypt would also have been ravaged by the famine.

Instead, God used Joseph to warn Pharaoh about the famine and to make provisions during the seven abundant years for the seven years of famine. As a direct result of this, Egypt became the super power of the region. This new Pharaoh evidently didn’t look too far into the history books.

Exodus chapter one covers a period of almost 400 years. Chapter one starts with the announcement of Jacob and his extended family coming to Egypt; it ends with the cruelty of another Pharaoh trying to halt the growth of the Israelites.

Chapter two covers a period of about 80 years and sets the scene for the birth of Moses; he would spend 40 years in Egypt as the adopted son of Pharaoh, and a further 40 years in obscurity in the land of Midian where he lived with his father in law, Jethro.

The remaining chapters 3 to 40 seem to cover a period of just 12 to 18 months, during which time Israel had the unforgettable experience of witnessing the ten plagues and crossing the Red Sea.

They would spend 40 years in the desert where they would receive the Law in spectacular fashion and build the magnificent Tabernacle signifying God’s presence in their midst.

In Exodus chapters 3 to 40 God wants us to pay particular attention to these two important themes.

« Previous Page A new Pharaoh – Joseph who? Next Page » Moses - The new Leader