The Fall of Man

"Now the serpent was more crafty than any of the wild animals the LORD God had made. He said to the woman, ‘Did God really say, you must not eat from any tree in the garden?'"

The first recorded words spoken to mankind (Eve, in this case) by that ancient serpent the devil;

There is something chilling about the KJV rendering; "Hath God said...".

We will develop this thought later as we examine the catastrophic effects of the fall as a result of Eve listening to the serpent as he blatantly questions the word of God the creator.

When we read of the serpent in Genesis 3, we must see something unfolding at a deeper level than a mere serpent talking to the woman. We see a creature that has been influenced or possibly even indwelt by Satan himself.

We will show that the New Testament has more to say about this tendency and tactic of Satan. The 'Thread' traces this deadly and deceptive tactic through every period of history on this timeline.

"You will not surely die", the serpent said to the woman.

"For God knows that when you eat of it your eyes will be opened, and you will be like God, knowing good and evil."

When the woman saw that the fruit of the tree was good for food and pleasing to the eye, and also desirable for gaining wisdom, she took some and ate it.

She also gave some to her husband, who was with her, and he ate it.

Then the eyes of both of them were opened, and they realised that they were naked: so they sewed fig leaves together and made coverings for themselves. 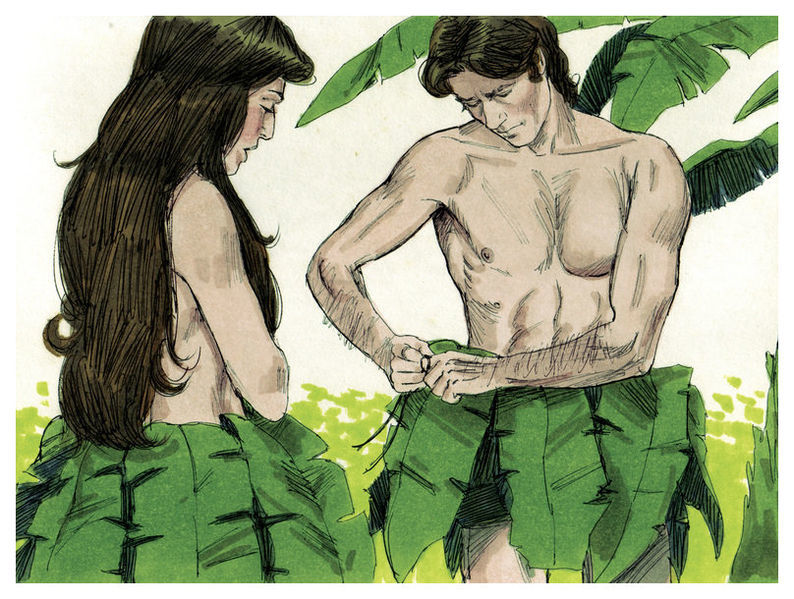 Self help would prove inadequate

Adam and Eve enjoyed the most beautiful and privileged surroundings which gave them a wonderful prospect for a safe and happy life in fellowship with God.

However, they had something in common with you and I; they were created with the free will to decide whether or not to obey God's command or to do their own thing.

In a moment of time, when they put the forbidden fruit up to their lips and took the first bite, everything changed. They knew what they were doing, God's command was clear.

I would suggest that we need to shake off the popular image of the 'apple'; subsequent to the fall, the way to the tree of the knowledge of good and evil and it's fruit was barred. This mysterious fruit is not mentioned again.

The LORD God made garments of skin for Adam and his wife and clothed them.

According to the bible this sense of shame is a direct result of the fall in Genesis chapter 3. This continues to be a natural phenomenon.

We are not given any dimensions for the Garden of Eden but I am sure that it was a large and spacious garden with plenty of pathways and places to walk around and explore.

The tree of the knowledge of good and evil (and the tree of life) were in the middle of the garden and I would suggest that Adam and Eve had to make their way to this tree, it was not just sitting in front of them within easy reach.

Therefore, as they walked to this tree, they would have had time to think about what God had said. Eventually, what they did was deliberate. They listened to the wrong voice and they disobeyed God's command, ignoring the consequences that had been clearly issued.

At the crucial time when Adam and Eve were in the vicinity of the tree of the knowledge of good and evil, Satan would have made his tactical approach.

They may well have been simply admiring the tree and acknowledging what God had commanded, but Satan's attack was calculated and callous. Satan deceived Eve at the very same point at which he himself fell foul - "For God knows that when you eat of it your eyes will be opened, and you will be like God, knowing good and evil."

It wasn't enough that Lucifer held a prestigious position among the ranks of heaven; he wanted more. The words of Isaiah the prophet are haunting.

"I will ascend above the tops of the clouds; I will make myself like the most high."

This is still of significant importance to us today regarding the process of temptation and sin. Very often the first sin that we commit is in our thoughts (our mind). Then, after we think of the issue, we respond in some way by taking action.

Eve responded to the temptation by reaching out and taking the forbidden fruit. She took a bite and she also gave some to her husband who was with her.

But I am afraid that just as Eve was deceived by the serpent’s cunning, your minds may somehow be led astray from your sincere and pure devotion to Christ.

A woman should learn in quietness and full submission. I do not permit a woman to teach or to have authority over a man; she must be silent.

For Adam was formed first, then Eve. And Adam was not the one deceived; it was the woman who was deceived and became a sinner.

The Apostle Paul wrote the above letters to the Corinthian church and to Timothy. He sees something in the fall of man and how it happened which shaped his thinking about where men and women fit in within the church.

Sadly, in the modern era, we have lost a sense of the mystery that was created in the sacred relationship between Adam and Eve, and therefore between men and women today.

Today there is a satanic undercurrent spreading across the western world which is eroding the biblical distinction between male and female to the extent that we have trans-gender or bi-sexual groups of people whom we are encouraged to accept as normal.

I suspect that the worldly influences of ‘sexual equality’ and ‘political correctness’ in the modern era are hindering the work of God the Holy Spirit in our churches across the land.

« Previous Page The Garden of Eden Next Page » Free will