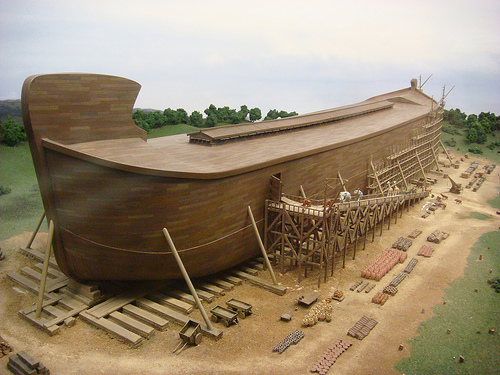 So make yourself an ark of cypress wood; make rooms in it and coat it with pitch inside and out. This is how you are to build it: The ark is to be 450 feet long, 75 feet wide and 45 feet high. Make a roof for it and finish the ark to within 18 inches of the top.

Put a door in the side of the ark and make lower, middle and upper decks. I am going to bring flood waters on the earth to destroy all life under the heavens, every creature that has the breath of life in it. Everything on earth will perish.

The first 11 chapters of Genesis cover a period of circa 1900 years, while the remaining 39 chapters depict the lives of Abraham, Isaac, Jacob and Joseph; a mere 300-400 years. Two interesting observations can be made about this:

First - God is more interested in people than in things.

Second - There is a beautiful simplicity in the early Genesis accounts of creation, the fall and the flood, which although simple and concise, contain deep truths about God and his gracious dealings with mankind.

The verses outlined above simply confirm that the flood would be universal; all life, every creature, everything on earth will perish.

The simple design and dimensions of the ark would prove to have the necessary accommodation for all the animals and would have the required strength and buoyancy to stay afloat in the raging torrents.

God gave Noah precise instructions and the required insight to understand and carry out his instructions. He told Noah what kind of wood to use, how many decks to include and how to seal the ark and make it water tight with pitch.

But I will establish my covenant with you, and you will enter the ark – you and your sons and your wife and your son’s wives with you. You are to bring into the ark two of all living creatures, male and female, to keep them alive with you.

You are to take every kind of food that is to be eaten and store it away as food for you and for them.  Noah did everything just as God commanded him.

They will come to you

Noah had a lot on his mind with this enormous building task. A boat of this scale had not yet been imagined let alone constructed. However, Noah did not need to concern himself with gathering all the various kinds of animals, birds and insects.

All the animals, birds and insects would come to Noah under God’s divine guidance. This was not natural, this was supernatural. God brought all the animals to Noah. There were wild animals that would have lived many hundreds or even thousands of miles away from Noah.

The sole purpose of some of these animals that had to travel the longest distances was to procreate along the way. Perhaps some of the animals that started out on the journey would never see the ark. They would simply fulfil their part of the journey and then see their offspring continue where they had stopped.

Imagine a family of bears or a family of baboons or elephants travelling across a vast continent only to die on the way as part of the family that would eventually finish the journey to the ark. Personally, I find this very moving and sad.

Some of the larger animals that would go into the ark would perhaps be young adults that had not grown to their full size. Some of the animals may well have gone into hibernation once they were settled into the safety of the ark.

It is worth remembering that the topography of the continents was probably very different before the flood, therefore, the various journeys that these families of animals would embark on, would be different from what we imagine in the region today.

If the topography was dramatically different, then it could be argued that large boats were not required in daily life, hence the scepticism that was levelled at Noah for building such a mega-structure.

We have already pointed out that clouds and rain may not have been a feature of earths pre-flood weather system. If this is so, it would offer an explanation to the scepticism of the people of Noah's time.

If they had never witnessed rain, where would the water come from to generate the flood that Noah was warning them about.

It is the same with people on earth today; who would believe that Jesus will come back to earths stratosphere and evacuate all the Christians on earth to escape God's judgment in the form of the Tribulation?

On reflection, this gigantic ark may well have been the inspiration for generations after the flood to build large boats for travel over the newly formed seas and continents. The concept of human and animal migration would be well founded after the success of the ark.

The main difference in the construction of this unique ark was that it had no sail or rudder. Noah, his family and all the animals were at the mercy of God regarding this journey into a new future. God would protect and guide this precious cargo until it settled on the mountains of Ararat.