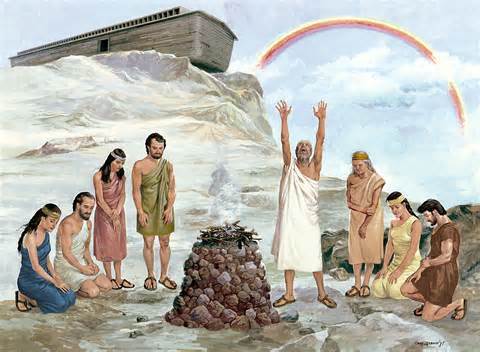 But Noah found favour in the eyes of the LORD. This is the account of Noah. Noah was a righteous man, blameless among the people of his time, and he walked with God.

Noah was found righteous and through him and his family, humanity was preserved. The earth had become corrupt. Man’s wickedness on earth was great, but Noah walked with God. There were other righteous souls who were contemporary with Noah.

We can think of Methuselah and Lamech who were still alive when God warned Noah about the flood. But they would both die before the judgement of the flood waters came on the earth.

Lot escaped from the wicked cities of Sodom and Gomorrah just before the fire and brimstone fell from heaven in judgement of the wicked people living there.

The New Testament Church will escape judgement through the rapture just before the Great Tribulation hits the people of this earth.

20 Then Noah built an altar to the Lord and, taking some of all the clean animals and clean birds, he sacrificed burnt offerings on it.

21 The Lord smelled the pleasing aroma and said in his heart: “Never again will I curse the ground because of humans, even though every inclination of the human heart is evil from childhood. And never again will I destroy all living creatures, as I have done.

22 “As long as the earth endures, seed time and harvest, cold and heat, summer and winter, day and night will never cease."

It is very sad to visualise these animals being led to the altar and sacrificed as a burnt offering to God. These animals had been led by God on a long journey to the ark, perhaps they were the second or third generation that had travelled a long distance.

Noah made this sacrifice as an act of worship and thanks to God; it was a very sombre occasion that reflected the seriousness of what had happened on earth. This was entirely appropriate. God acknowledged Noah's act of worship in the promise to mankind as outlined in v 21-22.

« Previous Page Big boat - No water! Next Page » The Thread - traced in the Flood