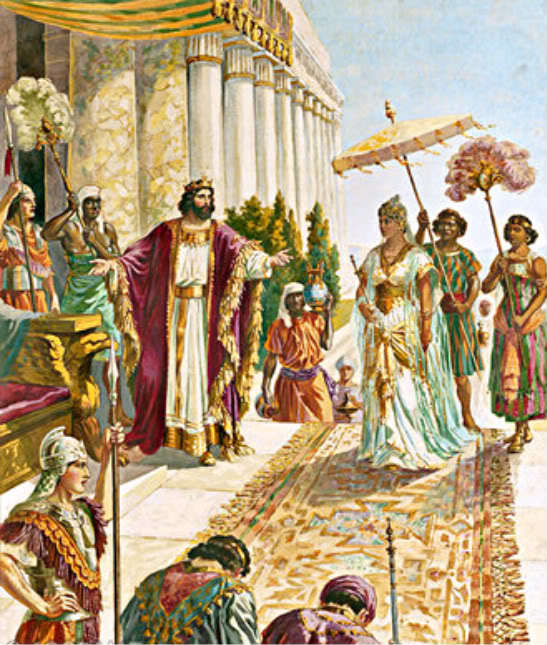 King Solomon was greater in riches and wisdom than all the other kings of the earth. 24 The whole world sought audience with Solomon to hear the wisdom God had put in his heart.

Year after year, everyone who came brought a gift—articles of silver and gold, robes, weapons and spices, and horses and mules. 26 Solomon accumulated chariots and horses; he had fourteen hundred chariots and twelve thousand horses, which he kept in the chariot cities and also with him in Jerusalem.

14 The weight of the gold that Solomon received yearly was 666 talents, 15 not including the revenues from merchants and traders and from all the Arabian kings and the governors of the territories. 16 King Solomon made two hundred large shields of hammered gold; six hundred shekels of gold went into each shield.

17 He also made three hundred small shields of hammered gold, with three minas of gold in each shield. The king put them in the Palace of the Forest of Lebanon.

18 Then the king made a great throne covered with ivory and overlaid with fine gold. 19 The throne had six steps, and its back had a rounded top. On both sides of the seat were armrests, with a lion standing beside each of them. 20 Twelve lions stood on the six steps, one at either end of each step. Nothing like it had ever been made for any other kingdom.

21 All King Solomon’s goblets were gold, and all the household articles in the Palace of the Forest of Lebanon were pure gold. Nothing was made of silver, because silver was considered of little value in Solomon’s days.

22 The king had a fleet of trading ships at sea along with the ships of Hiram. Once every three years it returned, carrying gold, silver and ivory, and apes and baboons.

27 The king made silver as common in Jerusalem as stones and cedar as plentiful as sycamore-fig trees in the foothills. 28 Solomon’s horses were imported from Egypt and from Kue—the royal merchants purchased them from Kue at the current price.

29 They imported a chariot from Egypt for six hundred shekels of silver and a horse for a hundred and fifty. They also exported them to all the kings of the Hittites and of the Arameans.

1 Kings chapters 1-11 give a full account of King Solomon’s forty year reign. This was the absolute pinnacle of Israel’s dominance on the world scene. The splendour and wisdom of King Solomon is unprecedented and unsurpassed.

We must ask the question - how did it all go so wrong?

Better to be a good finisher than a good starter!

It is a fact of history and a matter of regret that Solomon didn’t end his illustrious reign as well as he had started it. He did so much good and he achieved so much in his early reign.

It was only a matter of time until Solomon’s sin would catch up with him. Against the command of God Solomon chose to intermarry with many wives from the surrounding pagan nations. These marriages eventually led to the downfall of his kingdom under the judgement of God.

What is known as 'The Divided Kingdom' would follow this 'Golden Age'. Israel in the North would be separated from Judah in the South.