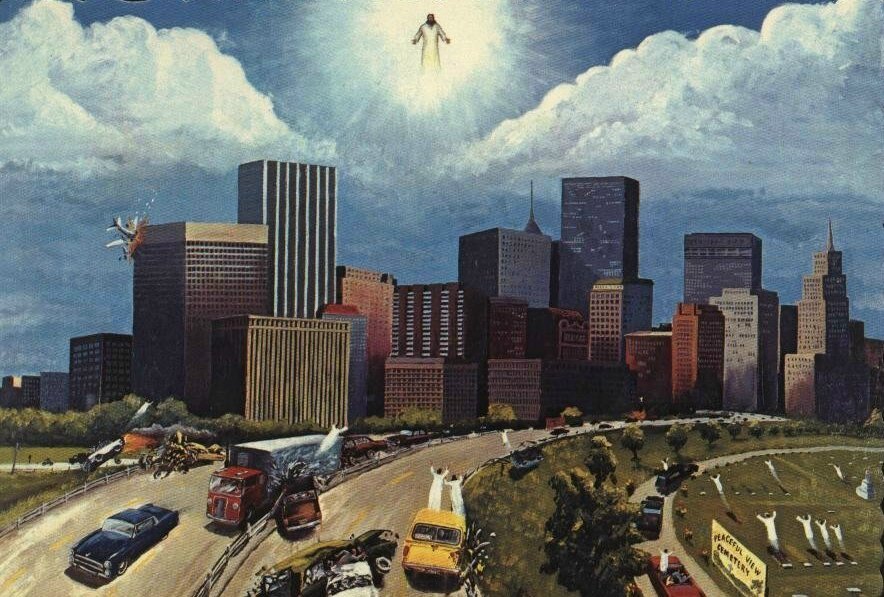 The period content on this timeline is based on the Bible. We have mentioned several times that the unfolding story-line of the Bible is consistent and coherent.

The events that are about to be discussed are real; they will take place.

The coming of the Lord

13 Brothers and sisters, we do not want you to be uninformed about those who sleep in death, so that you do not grieve like the rest of mankind, who have no hope.

15 According to the Lordʼs word, we tell you that we who are still alive, who are left until the coming of the Lord, will certainly not precede those who have fallen asleep.

16 For the Lord himself will come down from heaven, with a loud command, with the voice of the archangel and with the trumpet call of God, and the dead in Christ will rise first.

17 After that, we who are still alive and are left will be caught up together with them in the clouds to meet the Lord in the air. And so we will be with the Lord forever. 18 Therefore encourage one another with these words.

We subscribe to what is known as the 'premillennialist view' - that the Rapture will precede the Tribulation; according to this view, the sequence of events is as follows:

The resurrected saints and all Christians still living on earth - individual believers comprising the body of Christ - are removed from the earth and taken to heaven.

This happens suddenly and without warning. In fact, it could happen any day now.

Seven years of judgement are unleashed on the earth and its inhabitants. At the end of the Tribulation Satan is locked up in the abyss for 1000 years.

The judgment comes in three successive stages; seven seals, seven trumpets and seven bowls. These will be discussed in detail later.

The Millennial Reign of Christ

When the seven year Tribulation closes, Christ returns to the earth at the Mount of Olives and will reign for 1000 years. The raptured saints along with the great multitude of Revelation 7, who come out of the Tribulation, will be his ambassadors on earth during the 1000 years.

Righteousness, justice and peace will be characteristic of Christ’s reign.

The Final Judgement - The End of the World

The living and the dead, nonbelievers, from all ages of human history are assembled at the Great White Throne of God where final judgement is meted out to all mankind who have rejected Christ.

Revelation 20 v 11-15 describes how the books were opened and all mankind are judged according to what is recorded in these books.

The Lake of Fire is the only outcome and there are no excuses found to grant escape.

God reveals a New Heaven, a New Earth and a New Jerusalem where there is no sin or death.

God is finally vindicated as the only true and holy God. All his ways are finally seen as righteous, just and true.

God causes the old heaven and earth to 'pass away'.

The Day and Hour Unknown

36 “But about that day or hour no one knows, not even the angels in heaven, nor the Son, but only the Father. 37 As it was in the days of Noah, so it will be at the coming of the Son of Man.

38 For in the days before the flood, people were eating and drinking, marrying and giving in marriage, up to the day Noah entered the ark; 39 and they knew nothing about what would happen until the flood came and took them all away.

2 Dear friends, now we are children of God, and what we will be has not yet been made known. But we know that when Christ appears, we shall be like him, for we shall see him as he is. 3 All who have this hope in him purify themselves, just as he is pure.

On a future day, perhaps in your lifetime, Jesus will leave heaven and visit planet earth again, he will not touch down but will appear in the sky, he will return to the air, and all across the earth there will be a loud command, the voice of the archangel and the trumpet call of God.

The unsaved people of this world will not respond to this call. The dead in Christ will rise first and immediately be united with every born again Christian on earth and we will be taken up into the sky to leave this earth and go to heaven with Jesus.

The awful judgement of the Tribulation will follow but it will not fall on those who have been removed from earth in the Rapture.

Regardless as to what point in the stratosphere Christ appears, those who are caught up in the rapture will be ushered from north, south, east and west, to where Christ is.

This will happen in an instant. Mortality will be a thing of the past for those who are taken to be with Christ; the natural laws of physics, chemistry, biology and gravity will no longer apply to this privileged group of saints.

51 Listen, I tell you a mystery: We will not all sleep, but we will all be changed— 52 in a flash, in the twinkling of an eye, at the last trumpet. For the trumpet will sound, the dead will be raised imperishable, and we will be changed.

56 The sting of death is sin, and the power of sin is the law. 57 But thanks be to God! He gives us the victory through our Lord Jesus Christ.

Perhaps the graves will actually open as they did at the crucifixion; if so, it will make it extremely difficult for Governments to deny that the Rapture has taken place. Read this;

50 And when Jesus had cried out again in a loud voice, he gave up his spirit. 51 At that moment the curtain of the temple was torn in two from top to bottom. The earth shook, the rocks split 52 and the tombs broke open. The bodies of many holy people who had died were raised to life.

53 They came out of the tombs after Jesusʼ resurrection and went into the holy city and appeared to many people.

The dead will rise and their new resurrected bodies will be united with their spirits that come with Jesus from heaven. Those of us who are saved will suddenly be changed because our present mortal bodies are unfit for heaven.

In a few moments it will all be over. The church – the body of Christ made up of individual believers - will be gone from this earth. The Holy Spirit who indwells believers will therefore be departed from earth in this sense. Conditions on earth will be changed as a direct result of this event. 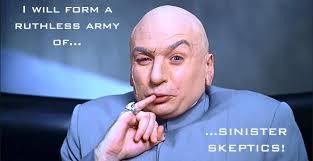 A note for the skeptics

The Day of the Lord

1 Dear friends, this is now my second letter to you. I have written both of them as reminders to stimulate you to wholesome thinking. 2 I want you to recall the words spoken in the past by the holy prophets and the command given by our Lord and Savior through your apostles.

3 Above all, you must understand that in the last days scoffers will come, scoffing and following their own evil desires. 4 They will say, “Where is this ‘coming’ he promised? Ever since our ancestors died, everything goes on as it has since the beginning of creation.”

5 But they deliberately forget that long ago by God’s word the heavens came into being and the earth was formed out of water and by water. 6 By these waters also the world of that time was deluged and destroyed. 7 By the same word the present heavens and earth are reserved for fire, being kept for the day of judgment and destruction of the ungodly.

Today, people ask; "Where is this coming?"

The question is; are you ready?

Woe! Woe! Woe to the inhabitants of the earth! 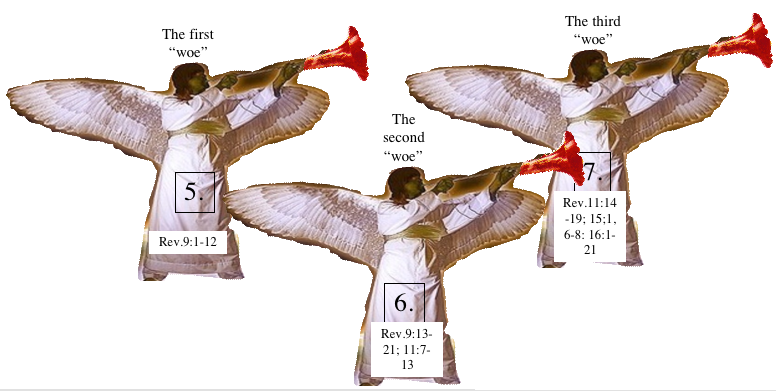 According to Revelation 8 v 13 - it is little wonder the ‘eagle creature’ cried;

“Woe! Woe! Woe to the inhabitants of the earth”

Noah and his family and the animals entered the ark just before the flood waters of God’s judgement came.

Lot and his wife and two daughters escaped from Sodom and Gomorrah just before the fire and brimstone descended in judgement.

These Old Testament judgements are an illustration of the coming judgement in the Tribulation, and so, we deduce that the Rapture will take place just before the seven year Tribulation begins.

Some scholars suggest that there could be a short delay (perhaps even a few years) between the Rapture and the commencement of the Tribulation. This suggested delay is deemed necessary to accommodate the building of a new Temple in Jerusalem and more importantly, the signing of an historic ‘Middle East Peace Agreement' between the Jews and Arabs. Daniel 9 v 27.

One thing that we can be sure about is this; the Rapture will be the official declaration of the dreadful period of judgement on earth known as – The Day of the Lord.

37 “Where, Lord?” they asked. He replied, “Where there is a dead body, there the vultures will gather.”

Because this is a universal event, it will span all times of day. For some it will be night time when people are asleep, for others it will be morning or afternoon depending on their location and time zone on the earth. But every born again Christian will depart from this earth and will literally and simultaneously be caught up and gathered to the Lord Jesus.

"There the vultures will gather"

This expression carries a double meaning.

First: Vultures are listed as the highest flying birds; they can soar in the sky at a breathtaking altitude of 37,000 ft. Jesus will come to 'the air' at the Rapture.

Second: Vultures gather in the sky when there is a fresh carcass on the ground. As we have already mentioned in the introduction; at the moment of the Rapture there will be hundreds of thousands of tragic accidents as a result of millions of Christians suddenly disappearing.

Those who are driving vehicles, flying aircraft and operating machinery, will disappear and it is difficult to imagine the consequences of this event. The death toll all across the earth as a result of these accidents will be truly staggering. This depiction of 'the vultures' is as dynamic as it is prophetic.

Christians from the past 2000 years – the Age of Grace - will rise from the dead first and then be immediately united with those Christians who are still living on earth. We will then be caught up together to meet the Lord in the air.

Actually, this should serve as a reminder to Christians that our time on earth is temporal. We will leave behind all sorts of things; houses, farms, cars, machinery, boats and motor bikes, businesses, gardens, jewellery, handbags and golf clubs.

We will also leave behind credit cards, mortgages, pensions, savings and debts.

Those who are blessed by taking part in the Rapture will experience an astounding sense of relief from all the worries, troubles and cares that life burdens us with.

For Christians who are alive when Jesus returns, there will be no death, just transformation. We will see Jesus and we will be changed into his likeness; it will be truly exhilarating.

I sometimes visit the gravesides of loved ones and imagine what it would be like to be there when the Lord returns. Reunited and transformed into the likeness of Christ.