The Heavenly Warrior Defeats the Beast 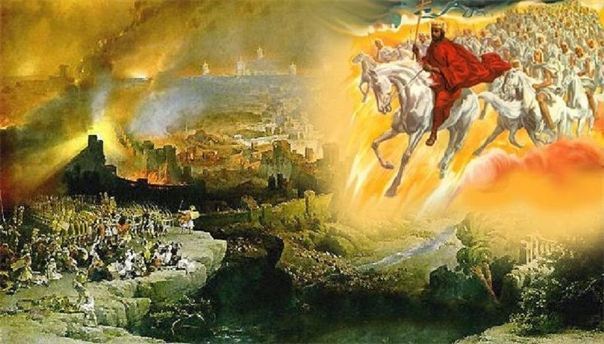 11 I saw heaven standing open and there before me was a white horse, whose rider is called Faithful and True. With justice he judges and wages war.

12 His eyes are like blazing fire, and on his head are many crowns. He has a name written on him that no one knows but he himself. 13 He is dressed in a robe dipped in blood, and his name is the Word of God.

14 The armies of heaven were following him, riding on white horses and dressed in fine linen, white and clean. 15 Coming out of his mouth is a sharp sword with which to strike down the nations. “He will rule them with an iron sceptre.”

He treads the winepress of the fury of the wrath of God Almighty. 16 On his robe and on his thigh he has this name written: King of kings and Lord of lords.

17 And I saw an angel standing in the sun, who cried in a loud voice to all the birds flying in midair, “Come, gather together for the great supper of God, 18 so that you may eat the flesh of kings, generals, and the mighty, of horses and their riders, and the flesh of all people, free and slave, great and small.”

19 Then I saw the beast and the kings of the earth and their armies gathered together to wage war against the rider on the horse and his army. 20 But the beast was captured, and with it the false prophet who had performed the signs on its behalf. With these signs he had deluded those who had received the mark of the beast and worshiped its image. 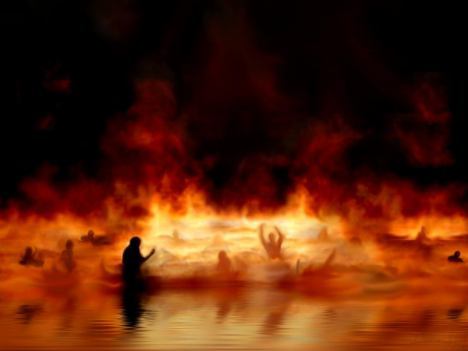 The dreadful lake of fire

21 The rest were killed with the sword coming out of the mouth of the rider on the horse, and all the birds gorged themselves on their flesh.

The seven year period of the Tribulation has come to an end. God’s righteous judgement on mankind has been spent in full.

The Lord Jesus Christ who was crucified by mankind is now triumphant and resplendent in glory. He has overthrown the false prophet and the beast. He will now establish his millennial kingdom on earth. His throne will be based in Jerusalem from where he will rule the nations in righteousness.

Now his time has come. Christ is vindicated in the eyes of men at last!

The death toll will be staggering

During the Tribulation we have outlined terrible times of upheaval as depicted in the seven seals, seven trumpets and seven bowls of God’s wrath. Universal deception will be orchestrated through the Antichrist that will affect all of mankind.

We have considered how there will be war on a global scale, and how famine, drought, and death will follow. The death toll will surpass that which was experienced in Noah’s flood and in World Wars 1 & 2.

We have conceded that there will be nuclear warfare; this is most likely to be triggered by countries that have a dictator style leadership rather than a democracy.

We have contemplated the reality of asteroids and meteorites that will collide with earth and wreak havoc.

By the end of the seven years, earth’s population will be decimated; it will be reduced from seven billion to somewhere between two and three billion. Is this not a 'wake up' call?

Bleak outline of the death toll

War on a global scale will kill millions of people; no specific number is given but the 'large sword' indicates that war will be widespread and will take a deadly toll.

We must assume that millions will die across the earth as the result of global famine. Survival of the fittest combined with widespread lawlessness will seal the doom of the poor and helpless.

Death and Hades are given power to kill one quarter of mankind in this single judgement. Based on a current world population of 7 billion means that the death toll in this judgement is a staggering 1.75 billion. If I need to spell it out this equates to 1,750 million!

As a result of the Antichrist's manipulative control over the new world system, a vast number of believers will be martyred. Rev 7 v 9 describes this multitude as innumerable. It is likely to be millions of those who refused the mark of the beast and who repented and believed the gospel message that is preached by the 144,000 sealed ones.

As a result of this devastating earthquake, it is not inconceivable that millions will die.

Following the period of silence, another great earthquake is described in this judgement. Again, it is not inconceivable that millions will die in this act of judgement.

We then move swiftly onto the second stage of judgement; the seven Trumpets.

This global storm of hail and fire destroys one third of the trees on earth and all the green grass. It must be assumed that millions will die in this judgement as it will be inescapable over one third of the earth.

When we consider the awful events of the Grenfell Tower disaster in London or the dreadful California wildfires, we can hardly imagine the horror of this judgment as it affects one third of the earth.

A meteorite or asteroid will collide with the earth and devastate one third of sea life and ships. It is not hard to imagine a series of tsunamis following this great judgement. Multiple tsunamis will simultaneously devastate coastlines across the continents. Again, it is easy to visualise millions perishing as a result.

The star 'Wormwood' or 'bitter' is more than likely a comet that will also collide with earth but will break up into many pieces as it enters earth's atmosphere. It will strike land rather than sea and as a result one third of all rivers and fresh water reserves will be polluted. The death toll will once again be staggering.

An army comprising 200 million demonic assassins, perhaps similar to the 'demon locusts' in the preceding judgement of Trumpet 5, will execute a judgement where one third of the remaining population of earth is killed.

God created the laws of mathematics; he likes numbers. The bible is full of examples of this theme. Regarding the solemnity of the judgments during the Tribulation; consider the following numbers:

It is clear to see that based on a world population of circa 7 billion; the death toll of one quarter of mankind in Seal 4 and one third of mankind in Trumpet 6 are each 1.75 billion.

It would be reasonable to assume that at the Rapture circa 1 billion or more Christians will disappear from the earth. If this were the case; then the death tolls of Seal 4 and Trumpet 5 could be 1.5 billion in each event. The net result is unchanged; the population of earth will be reduced to less than 50% in 7 years!

See link to World Population Clock - bottom of this page.

This 'sliding scale' ratio would yield the same result regardless of the population at the commencement of the Tribulation, the actual death toll is breathtaking.

If 3.5 billion people will perish as the result of just two of the 21 judgments; we can safely deduce that when we add the millions of deaths resulting from the other judgments which are outlined above; earth's population will be decimated from 7 billion to much, much less than 3.5 billion during the seven year Tribulation.

During the seven year Tribulation, earth's population will be reduced by way more than 50%. This is staggering and the church is not communicating this message to the world. Why are we silent? We ought to be shouting from the rooftops.

The apocalyptic terrors that are portrayed in films of the modern era such as - The Late Great Planet Earth, Deep Impact or Armageddon - will suddenly become a harsh reality. The horrors of an eternal hell will await those who refuse to repent.

How sad and sobering it is to realise that the book of Revelation is not widely taught in the modern day church, and this despite the promised blessing for doing so.

If you are a Christian - "TELL SOMEONE" about these imminent events.