Slavery in Egypt for 400 years 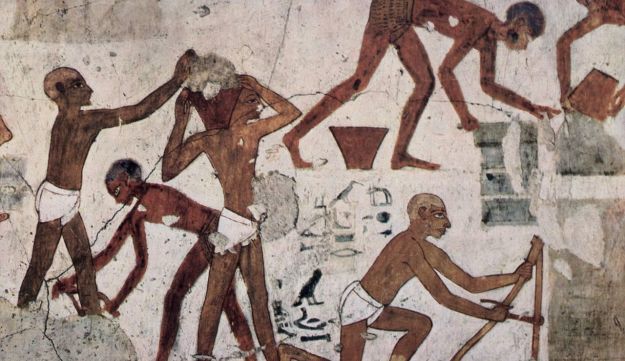 As the sun was setting, Abram fell into a deep sleep, and a thick and dreadful darkness came over him. Then the LORD said to him, “Know for certain that your descendants will be strangers in a country not their own, and they will be enslaved and mistreated four hundred years.

But I will punish the nation they serve as slaves, and afterward they will come out with great possessions. You, however, will go to your fathers in peace and be buried at a good old age. In the fourth generation your descendants will come back here, for the sin of the Amorites has not yet reached its full measure.”

It is significant that the Lord Prophesied to Abraham that his descendants would be enslaved in Egypt for 400 years. This actually happened after the death of Joseph.

This is how it all began for the nation of Israel. It started with the call of Abraham. It continued through Isaac and Jacob. Jacob had twelve sons, one of whom was Joseph.

Joseph was God’s chosen instrument to pave the way for the children of Jacob (subsequently known as the children of Israel) to settle in ancient Egypt and escape the famine that was to consume the Middle East, Egypt and beyond.

Noah was still alive when Abraham was born. According to the Genesis 11 genealogy, Abraham would have been around 60 years old when Noah died.

This is interesting because there is a tangible link between Noah and his family who were born before the flood; and Abraham, Isaac and Jacob, who were born after the flood.

It would seem that before the flood there was no official system of governance established in society where God was recognised as the supreme ruling authority.

Men and families did as they pleased, hence the disorder and mayhem that corrupted the earth and brought about the righteous judgement of God in the form of the flood.

After the flood, while Noah was still living, Abraham was born, and it was through Abraham that God was going to make a change in how he revealed himself to mankind.

A new form of divine governance was going to be established through Abraham as a new and dynamic method of communication between God and mankind. This would be developed through the giving of new covenants and eventually the giving of the law – The Ten Commandments.

A simple overview of how this new relationship between God and mankind would develop after the flood would look like this:

Abraham was called by God and given the promise that he would be the father of many Nations. The point was initially missed that Israel was to be a light and example to the gentile nations.

Isaac was called by God and the promise to Abraham is reiterated.

Jacob is renamed Israel and the promise to Abraham is reiterated yet again. Jacob's twelve sons became the Twelve Tribes of Israel - an everlasting identity was born.

Joseph is used by God to bring the twelve sons of Israel into the land of Egypt during the famine. During this period of time the nation of Israel would start to develop and would comprise the twelve tribes.